I met Bo Gravely almost twenty years ago when I was working in the cellular industry. He was managing Tilt (an arcade in Liberty Fair Mall in Martinsville). Soon after, I hired him to work with me. I have many great memories of the time we spent explaining coverage areas and roaming charges. But, one sticks out — it was the Saturday morning when Bo and I activated 26 phones in the span of three hours. We didn’t have time to catch our breath between activations. Deep down, I don’t think we wanted to. Our goal was to set a record, and we did.

The point of that is… no one can ever deny that Bo knows wireless.

September marks the three-year anniversary for Bo Know Wireless in Martinsville. “The shop is a repair center for phones and tablets. Any cell phone,” Gravely says. There isn’t much he can’t fix when it comes to “phone accidents” included the dreaded cracked screens and faulty charging ports. And he can complete most repairs at a lightning pace. Most within an hour. Gravely attributes the fast service to keeping high quality parts in stock. Repair prices vary depending on the phone or tablet, but on average they range between 70 to 160 dollars, and walk-ins are welcomed. There is no need to set up an appointment. He also replaces iPhone batteries. “It’s easy to forget that an iPhone has a battery since it’s not easy to access, but it’s there,” he adds with a laugh. A replacement iPhone battery will run you about 30 dollars. 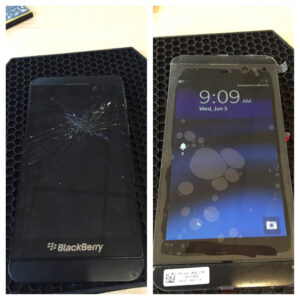 Gravely opened the shop about a year after his father passed away. “I had so many years of experience in the cellular business, I figured why not work for myself,” Gravely says. He used his broad knowledge to secure a variety of pre-pay options, including Boost Mobile, Verizon, Page Plus, and Net 10, for those not looking to be tied to a cellular contract. “There’s many benefits to going with a pre-pay plan besides the no contract feature,” Gravely says. “If your budget takes a hit, you can skip a month, and pay the next month to have the phone turned back on without having to pay for the skipped month.” Usually, a carrier will hold the number for 90 days. The coverage is more blanketed for pre-pay than in the past. “Prepaid phones utilize post-pay towers. For the most part, you get the same coverage,” Gravely adds.

At Bo Knows Wireless, customers can get a full customization experience for their phones. Gravely offers a wide assortment of tempered glass choices to transform phones with specific colors or scenes like outer space. “Tempered glass is added protection for the phone’s screen. I can customize the whole phone. Let’s say you want a red iPhone, come see Bo,” Gravely says.

The absolute best thing at Bo Know Wireless is the customer service. Gravely has a contagious smile that helps ease the emotions of a cracked screen. “I’ve been in the industry so long, I’ve seen it all,” he says. With Gravely, you get the personal customer service experience that is sometimes lacking at big box stores. He goes the extra mile to make sure his customers understand how their phones work and is always available to answer any questions. “Even if you see me in the grocery store,” he concludes.