You’ve seen his work in the Register & Bee, on his Living in Danville & Pittsylvania County facebook group, and most recently as a reporter and photographer at the Chatham Star-Tribune. We sat down with photographer Matt Bell to discuss his introduction and inspirations into the world of photography.

Can you give the readers an introduction to Matt Bell?

I was born and raised in Danville. I graduated from GWHS in 2008 and was a member of the yearbook staff there as a photographer. I went to Liberty University and graduated in 2012 with a BS in Social Sciences. To graduate I wrote a 60-page thesis on the history of Dan River Inc. instead of doing an internship.

How long have you been into photography?

I’ve been into photography ever since 2004 with my first point and shoot digital camera – a Kodak Easyshare that had a whopping 3 megapixels.

How would you describe your style?

I approach photography with a journalistic style. Melanie Vaughn once told me, “I’ve never seen photography that I felt was so raw and real.” It’s very rare for me to capture a moment, and then alter the photo. I don’t enjoy altering a photo because then you’ve taken away what is real. The moment you’ve captured a photograph you’ve captured a moment, that’s history. It’s instantaneous. Nowhere in human history have events been able to be recorded as fast as they are on a camera. 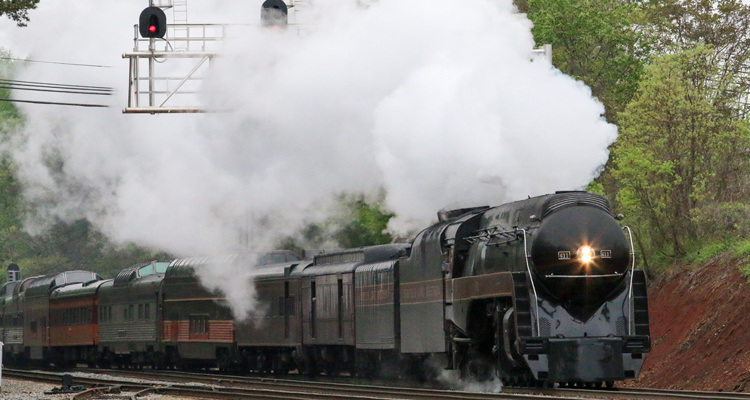 The Norfolk & Western Class J 611 returned to service nearly 21 years after having her fire dumped for the final time in Dec. 1994. I’ve tried to chase it ever since. Seen here passing through Hurt, VA.

What (or who) inspired you to become a photographer?

I was motivated to start photography as a hobby in 2013. At the time, I was working part- time and aggressively seeking full-time employment. It just seemed like something fun to do to pass the time and get my mind off of things. My parents, David and Jeanette Bell, gave me a camera as a birthday/college graduation present.

I became a volunteer photographer for the Lynchburg Hillcats that summer, and while it didn’t pay, they did feed me which was the perfect tradeoff for a part-timer. It was there that I met Lee Luther Jr. who took me under his wing and helped me better my photography. Lee is an award-winning photographer in Central Virginia who has been shooting since the 1970s.

I printed off my top 100 images as 4×6 prints and showed them to him. He showed me ways to better my shots from there. Lee helped me with everything from framing to settings.

Suddenly a hobby morphed into thinking about a career move.

Finding work in the history field just wasn’t working out – especially when employers said that I didn’t have enough experience to qualify for employment.

Then in July of ’13, Lee let me use a Nikon D3s and a 70-200 f/2.8 at a game. There was a play at the plate with the ball going home and runner rounding third. I fired off frame after frame as the runner crashed into the catcher and was called out. While the spectators were astonished, I was quickly checking to see if I had gotten the shot.

I had it. And I was hooked.

For the rest of the season when he was freelancing, and even when he was just there to watch the games, Lee worked with me.

Then he took me along to Luray, VA to photograph Nelson County High School’s first football game of the season. Thereafter for every Friday night football game I could, I was there and shot alongside him learning techniques and how to write the cutlines for the photos.

For the 2014 season, I was invited back to be the Lynchburg Hillcats official photographer. I did the photos for their trading cards that year as well as 2015.

Then in April 2015 after almost two years of freelancing and pushing my name to get freelance work to pay for gear, I was hired by the Register & Bee as their last full-time photographer.

The perfect shoot is any event where you can feel the energy in a room or place like a stadium. There is no better place to shoot than Lane Stadium at Virginia Tech. To be on that field with camera in hand as “Enter Sandman” by Metallica starts is incredible. Virginia Tech just has an energy all on its own. 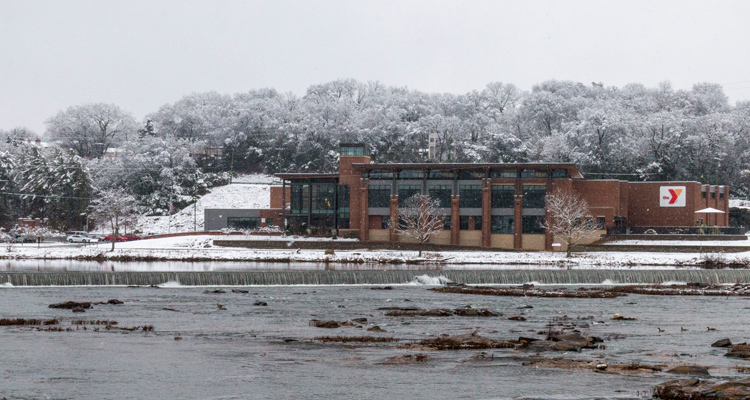 December 8 is my wife, Lexi’s birthday and I got her snow which made capturing this shot of the Dan River and Danville Family YMCA possible.

What are your most memorable shoots?

Anything that has a historical angle. When I was with the Register & Bee and out on assignment with Denice Thibodeau, we would take odd ways back to the office no matter who was driving just to see what was going on in the neighborhoods and business district. I can’t tell you how many buildings we got into over the years because someone was there going in or coming out, and we were snooping. Between the two of us there aren’t too many buildings and roofs left in the River District that we haven’t been in and on.

Along the way, I developed a love for night photography. Shots with just strictly ambient light present a challenge all on its own.

I love shooting trains in my spare time. That all started by mistake. I was downtown Lynchburg photographing the city and got a shot of a train as it passed me at a crossing. Something about the engines hooked me. On that note, I love photographing the Norfolk & Western Class J 611. One, because it was my grandfather’s favorite engine, and two, because it’s a steam engine that was out of service since 1994 and came back in 2015.

I’ve shot a major league baseball game which is a lot of fun. Fast paced, but I enjoy it.

But my absolute favorite shoot is high school football. I enjoy the friendships I’ve made over the years with the voice of the Eagles — Chuck Vipperman, Clark Whitfield, and Don Robertson in the Eagles press box at GW. I don’t always get the stats right or know all the little tidbits they like to share on radio. I can always call on these guys at any time and know they’ll help me. You can’t find better friends than that. 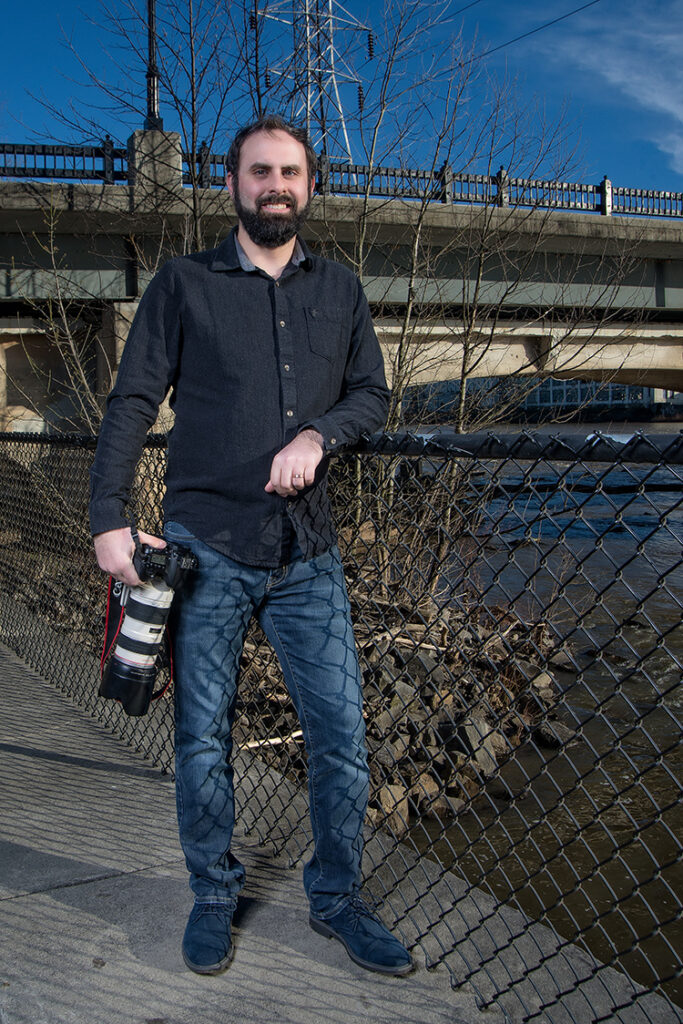 Whose photography has influenced you the most?

The photography of Lee Luther Jr. was a huge inspiration. Another photographer who inspired me was O. Winston Link. He emphasized less about the photos and more about the subject matter. Link is known for his train photos and especially the end of steam for the Norfolk & Western Railway. While he knew the photos were good, he was more interested in capturing a moment that was disappearing from the American landscape.

The combined works of John Tate, Leon Townsend, Richard T. Davis, Tiny Setliff, and Julian Henderson also are inspirational to me. I used to study their photography for hours when I got into facebook’s “You Know You’re From Danville When…” group. I tried mimicking what they did and blended it with my own style. They had a record of excellence with the people in this area, and I want to continue that. Even though I am now with the Star-Tribune, I will still continue that.

Can you tell us a little about your “Living in Danville” facebook page and what inspired you to create it?

I was sitting at home sick one day in January 2017, and it began to snow. At the time I was living in Altavista. So, I got on facebook to see if it was snowing in Danville too. I didn’t see much, but a friend of mine in Lynchburg, Kipp Teague, has a group called “Living in Lynchburg” that was just overflowing with snow photos.

The following week, I tinkered with facebook to see if there was anything like that group for Danville. There’s “You Know You’re From Danville When…” which is great for all things Danville’s past. Then there’s “Danville/Pittsylvania County History,” which for historical purposes is an excellent source. But for Danville’s present I wasn’t finding much.

I established the group to feature the beauty of the area. The community as a whole is all about positivity, and this is a good way to spread it. Nevertheless, it caught traction fast. Everything is featured there including, but definitely not limited to sunsets, sports pics, building shots, nature photos, Christmas morning madness, and anything else you can think of. All with the stipulation that it has to relate in some way to the area. You name it, there’s probably a photo for it in the group.

Do you have any advice for aspiring photographers?

Get ready to hear no a lot. From “No, I don’t want to pay.” to “No, we don’t need a photographer.” and everything in between.