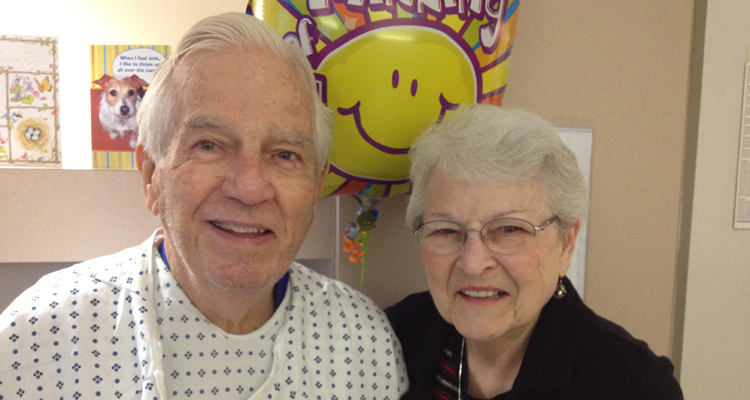 by showmag
Phone calls are usually benign.  Most often, they are happy chances to catch up with others.  But, earlier this year, I realized that you never know what to expect when you answer. My name is Robin Duncan Hasty and I was born and raised in Danville.  In fact, I was born in Danville Memorial Hospital... Read More

Phone calls are usually benign.  Most often, they are happy chances to catch up with others.  But, earlier this year, I realized that you never know what to expect when you answer.

My name is Robin Duncan Hasty and I was born and raised in Danville.  In fact, I was born in Danville Memorial Hospital (now known as Danville Regional Medical Center). Due to my husband’s job, we moved to Ohio in 2009. I work as a Registered Nurse Case Manager, so I am no stranger to the inner workings of a hospital and its staff. On January 10, my view was from the “other side”— the patient and family side.

Since moving to Ohio, I’ve worried about being so far away from Virginia — what would I do if something happened to my parents? I am an only child and have felt that weight heavily since moving away.

Well, it happened on Thursday, January 10. The call I had been dreading since moving to Ohio.

I was on my way out of the house — late for a hair appointment and couldn’t answer the phone. I got in the car, drove out of the driveway, and listened to the voicemail as I went down the street.

It was my mother calling to tell me that my father was having a heart attack. It was a horrible call. Her voice was full of gut-wrenching pain. I don’t even remember where I turned around to head back home. I know it was only a few driveways past ours but have no recollection from the moment I listened to the message to the time I parked the car at the house.

I ran inside and flew around packing a suitcase, work computer, work information, knitting projects, personal computer, bathroom items, two large mugs of coffee, work and personal phones, charger, etc. I packed for an undetermined stay. I watered plants and lured the cats back in the garage so I could close them inside. I called my husband, Andy, and the boys to break the news.

In about an hour, I was on the road. Thank goodness, I had filled the gas tank the night before. Under normal circumstances, the drive from Ohio to Virginia takes about eight to eight and a half hours. I made it in six hours and forty minutes with one stop for gas. I don’t think my foot touched the brake except for when I stopped in Beckley, West Virginia to fuel up.

By the time I arrived at the hospital, our boys were already with my mother. Daddy was in the Intensive Care Unit where visiting hours are limited. Since I had just arrived, they let me go back to see him.

It was the sight that no one wants to see — a loved one hooked up to tubes and monitors. I remember it all too well. It had been just a little over three years since Mom’s open heart surgery. It’s like a punch in the stomach. As a nurse, I’m well acquainted with the hospital equipment, but it takes on a different perception when attached to your loved one. Daddy was responsive but sedated due mainly to the intubation tube. He was able to nod and squeeze our hands in response to questions, which was good.

By noon on Friday, the tubes had been removed from his throat and he was talking, eating, and drinking a little. The hospital staff mentioned moving him to a regular room on Saturday. He was very sore but otherwise doing well.

The timing of the big event was nothing short of extraordinary. Daddy wasn’t feeling well Wednesday night, so he went to his doctor on Thursday morning. They told him he needed to go to the emergency room where they could run some tests because they didn’t have the equipment in the office. He drove home, picked up Mom, and drove to the hospital.

Daddy walked into the Emergency Room at Danville Regional talking normally with everyone. They led him to a room and were checking him in. The very second his head hit the pillow on the table, he gasped for air.

He was having a heart attack.

A code blue was called and the rest was the miracle for which everyone hopes. A code is never easy to watch and it pains me to know that Mom was standing in the corner of the room experiencing all of it, first hand.

After some tests and discussion, a heart catheterization was done and a major vessel in the heart was found to be blocked. A stent was put in and left to do its job. Thankfully, it worked.

There is no feeling in the world like the fear when a loved one’s life is threatened. It is almost palpable. I’ve known it twice now and this time was by far the worst of the two. The feeling is not the same when it’s about your own health issue. I’ve been there once and it is definitely different. It doesn’t even compare. The fear for your loved one is gripping. It has teeth and bites down so hard on your heart that you can barely breathe.

But breathe, you do. Strength comes when you most need it.

Through it all, my father never lost his sense of humor. He has always loved a good joke and is quick to make a funny. When Mom told him that the doctor said he had probably had a few silent heart attacks without realizing it, Daddy replied, “I didn’t hear this one, either.”

Daddy is early on his road to recovery. Today though, that road is a brighter one than it was on that dark Thursday. The timing was impeccable.

Now, over a month after the big event, Daddy is doing very well.  He attends cardiac rehabilitation at the hospital and is getting his strength back.  Soon, he will be resuming his morning walks that likely played an important part in helping him survive such a major blockage. In a crisis, you count on more people than you realize. My mom and I want to thank everyone who spoke a well wish, prayed a prayer, crossed their fingers in Daddy’s direction, called to inquire how he is, offered to do “anything to help”, posted a comment, sent a text message, etc. I want to thank Barry, my parents’ minister, who stayed with Mom and called me periodically with updates while I was en route and Barbara, who stayed with Mom for most of the afternoon. I want to thank the ICU nurse who helped keep me calm as I drove back to my hometown to be with my father. I want to thank my adult sons who got in the car together and drove to be with their grandmother. The drive from Ohio to Virginia was excruciating, but knowing these people were with my mother and father gave me comfort.

But, most of all — most of all — I want to thank the staff in the Emergency Room at Danville Regional Medical Center. Along with the staff in Intensive Care and on the Sixth Floor, they simply did their job. They did it well. Their quick and decisive actions saved my father’s life. Thank you for your knowledge, skill, and professionalism. My mother and I are forever grateful to you all for saving my father’s life. And with every single beat of my father’s heart, he concurs.

March 2013
Previous Post
Do I Need to Go to the Emergency Room?