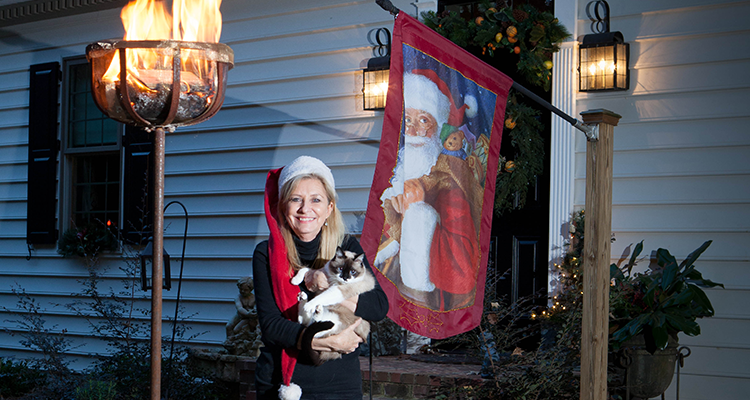 by showmag
The most unique house in Danville this Christmas will be the Colonial Williamsburg home of Ron and Dianne McMahon. Its Christmas decorations bring to mind a bygone era, how that holiday was celebrated in that colonial capital during Virginia’s days as a colony. But it’s what you don’t see that makes the home so unique.... Read More

Von Wellington: Community Strong Person of the Year 2016
Nightmare at Our House – 0112

The most unique house in Danville this Christmas will be the Colonial Williamsburg home of Ron and Dianne McMahon. Its Christmas decorations bring to mind a bygone era, how that holiday was celebrated in that colonial capital during Virginia’s days as a colony.

But it’s what you don’t see that makes the home so unique.

Ron Mahon, an electrical engineer, wanted to build a house that was energy efficient. Dianne had always wanted a Williamsburg house, because as she exclaimed, “I love anything colonial.”

Despite the fact that colonial-era homes were devoid of air conditioning, insulation, heated water, electric lights, storm windows, and a host of other modern conveniences, Ron and Dianne have all these and more. But their totally energy efficient Williamsburg home has some unseen technology you probably never heard of. And therein lies the secrets to their house.

Ron reasoned, “I can’t create energy, but I can conserve what I use, and yet not sacrifice quality of life in the process.” With energy efficiency in mind, Ron designed, engineered, and with Dianne’s help, built the house from the ground up, doing the electrical, plumbing, cabinetry, and some of the flooring themselves.

Almost everything (85 percent) in the house including furniture, fixtures, and lighting was made in America. And all the furniture is 18th century design as well.

Like a colonial home, the McMahon home has candles, except they’re incandescent lights that look like candles, with the difference hardly noticeable. They also use compact fluorescent lights and some LED lights, both true energy savers.

The home has triple pane windows consisting of two thermal glass panes with argon glass sealed between them and a third pane which is a storm window that opens inside. They also minimized the number of windows because as Ron emphasized, “Windows cause the most heat lost in a house.”

Foam insulation is used throughout because foam traps air and forms a temperature barrier. It’s used under the concrete foundation, in the basement and garage, in the walls, inside the roof, all unseen. “It’s as if we live in a foam igloo,” said Ron. The energy savings is unreal.

The home has no air-conditioning ducts, using the new Mini Split air cooling and heating system. The outside unit is able to extract heat from air down to negative 4 degrees. Hence no need for a furnace.

All sources of water depend on very flexible high-tech plastic tubing, each connected to one valve in the basement. There are no other valves, so the plumbing is an easy fix. And there’s a tankless water heater also. A propane gas unit heats the water as you need it.

So now Dianne can enjoy her Williamsburg Christmas without roughing it like in the old days 200 years ago. Complete with fire logs and their Williamsburg decorations, Ron and her cat Moe will enjoy it too, like no one in the colonies ever did.