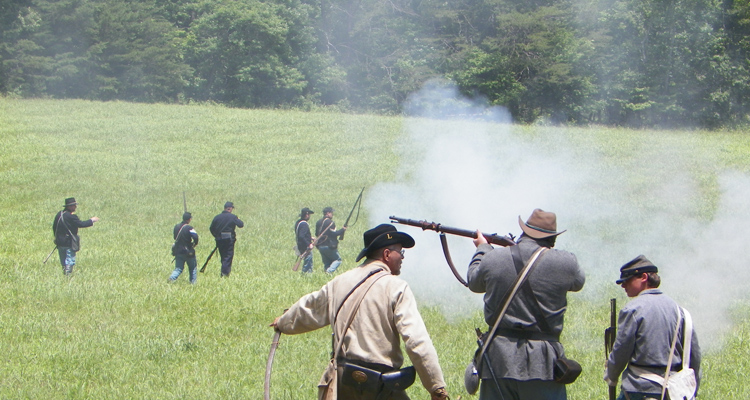 by showmag
Plan a day trip or overnight excursion to these buzz worthy events Spring is here and that also means the kickoff to festival season! My family and I love attending festivals throughout Southern Virginia to sightsee, eat fun foods, shop and enjoy spending quality time together. Festivals are a good way to discover new businesses... Read More
You Will Be Successful at a Healthy Lifestyle

Am I Having a Heart Attack?

Plan a day trip or overnight excursion to these buzz worthy events
Spring is here and that also means the kickoff to festival season! My family and I love attending festivals throughout Southern Virginia to sightsee, eat fun foods, shop and enjoy spending quality time together. Festivals are a good way to discover new businesses in your community that you might not know about and meet others that share the same interests as you. Here is a rundown of some upcoming Southern and Southwestern Virginia Festivals not to miss this year.

May 22-25 (Gates open Thursday at 11 a.m. to VIP ticket holders and on Friday at noon for General Admission)

Driving out to the countryside on the outskirts of Martinsville, Virginia you’ll pass residential areas, forests and farms before stumbling upon a little piece of heaven in Southern Virginia. Blue Mountain Festival Grounds, the current home to Rooster Walk Music & Arts Festival, is nestled among rolling hills making a perfect amphitheater for the event’s three stages. In the middle of it all, a shaded oasis and a cool mountain creek provides space for relaxation and dining. Upon arrival you can turn off your mobile devices and truly unplug because there’s no cell phone reception in this peaceful valley.

Each Memorial Day weekend more than 3,000 people make a pilgrimage to this location to spend time enjoying an impressive lineup of musicians and bands, musical performances, storytellers, artists and demonstrations. This year is no exception as the lineup of performers includes more than 30 musicians and bands including Karl Denson’s Tiny Universe, The Infamous Stringdusters, Tim O’Brien & Darrell Scott, Anders Osborne, The Pimps of Joytime, Particle, The Lee Boys, Yarn and many more! The festival was named the #1 up-and-coming festival in the mid-Atlantic and Southeast U.S. by Blue Ridge Outdoors Magazine last year.

On-site camping is available and activities go on around the clock ranging from early morning yoga and nature programs to musical workshops, a charity duck race in the creek and late night silent discos. If camping is not your cup of tea, several area hotels and B&B’s are available just 15 minutes away. Two complementary shuttle buses sponsored by VisitMartinsville.com run on a constant loop from Blue Mountain to several stops in town from one hour before the first band begins to half an hour after the last band ends.

Throughout the three-day event, bands alternate between the venue’s two main stages so that there is little to no delay in music between sets. A third smaller stage offers a performance venue for local bands. There are plenty of vendors to browse and great food to eat. On Sunday morning, Rooster Walk hosts the Tuff Stutter 5K, billed as one of the toughest trail runs in the Blue Ridge.

Rooster Walk is a very family-friendly event. A children’s area offers a stage dedicated to youth programming plus a safe play space for kids to enjoy crafts, bubbles and hula hooping while parents can still hear the music. A sheltered area with rocking chairs is even provided for parents of smaller children. There are always lots of surprises in store like magician acts, fire twirlers, hoop dancers and even spontaneous parades for young music enthusiasts to join in. Blue Mountain Festival Grounds, Martinsville; roosterwalk.com; single day tickets start at $30

If you were born in the 70s or 80s then chances are good that you had Fieldcrest-Cannon bed sheets or bath towels in your home. Growing up in rural Georgia, I recall my mother purchasing this American-made brand for our home. Years later after moving to Virginia, it was a real treat to finally see the Village of Fieldale where this product was manufactured. While Fieldcrest Mills is no longer in operation as a textiles manufacturer, the iconic brick smokestack bearing the painted name “Fieldale,” still stands watch over the quiet village of Fieldale, Virginia. In 2007 Fieldale was named to the State Historic Register and in 2008 it was added to the National Register. Today the village is known for its serene hiking and biking trails, paddling opportunities, world class fly fishing and weekly jam sessions.

Each May the village comes alive with a day-long celebration of the mill town that was established in 1917 by Marshall Field and Co. The Fieldale Heritage Festival honors the history of the textile industry that built this community and the dedicated residents that have shaped its future. The event, which serves as a homecoming for residents that grew up in Fieldale, kicks off early in the morning with a Pancake Breakfast at 7 a.m. Soon vendors fill up the lawns and streets of the town square with delicious foods, gifts to purchase, local crafts and informative displays.

Exhibits showcase what the village looked like in the early 1900s and highlight the many community leaders and interesting people that have lived in the village. Festive music, antique cars and children’s activities are offered throughout the day. Costumed soldiers representing local residents that participated in the revolutionary war parade through the festival grounds and even have an encampment set up from which they demonstrate campfire cooking and the firing of muskets and cannons. Miss Virginia will also make a special appearance at the festival this year.

Festival participants can travel nearby to The Virginia Home Inn for guided tours of the historic B&B which was constructed as a dormitory for female employees of the mill. A short walk down to the Smith River will lead festival goers to the Historic Fieldale Iron Bridge Memorial, an icon of the community, and the Textile Heritage Trail which details the story of textiles throughout the community of Martinsville-Henry County. Plan for a full day of activity during your visit! Fieldale Village; visitmartinsville.com; free admission

Witness the Battle of Martinsville, a Civil War reenactment, encampment and living history weekend spread out over 60 rolling acres of land. You’ll have the opportunity to see sutlers, artillery, horses and more. Meet General Keith Cornelius, commander of the Confederate Forces and Colonel Lance Dawson, commander of the Federal Forces. Battles will be held both days with full size guns, artillery, infantry and cavalry. Smith River Sports Complex; Axton, VA; smithriversportscomplex.com; $5 admission, children 12 and under free

The Virginia State Peach Festival began in 1988 to recognize and promote the peach harvest of Patrick County. This year the Festival will not only be held at a new location, Wayside Park, but for the first time ever camping will be available through the Park. The Friday night concert event will feature music by Evan and Dana and The Worx. Also fresh local peaches, food, crafters and business exhibitors and much more! Wayside Park; Stuart, VA; patrickchamber.com

A celebration of arts and culture in Uptown Martinsville. Join the fun by visiting Martinsville’s many participating museums, art studios, shops and restaurants. Special events, including live music, community theatre and cocktail parties, will take place at different venues. Tickets can be purchased online or at participating venues. Uptown Martinsville; piedmontarts.org; $10 admission

More than 10,000 visitors pack the streets of Uptown Martinsville each year for this festival. The event’s vendors offer everything from free balloons to fine art, plus lots of kid-friendly activities including inflatable bounce houses and a petting zoo. “Little Germany” will also offer a beer garden selling craft beer as well as traditional German foods like delicious bratwurst. The Broad Street stage will showcase an assortment of talent as well. Uptown Martinsville; martinsvilleuptown.net; free admission

Slither your way into the Virginia Museum of Natural History to witness some of the most exciting cold-blooded creatures around! Marvel at over 200 live snakes and other reptiles. Take part in reptile-themed games and crafts throughout the day. Cobras, rattlesnakes, alligators and much more await you at the Reptile Day Family Festival. Virginia Museum of Natural History; Martinsville, VA; vmnh.net; Admission free to museum members and $3-5 for guests