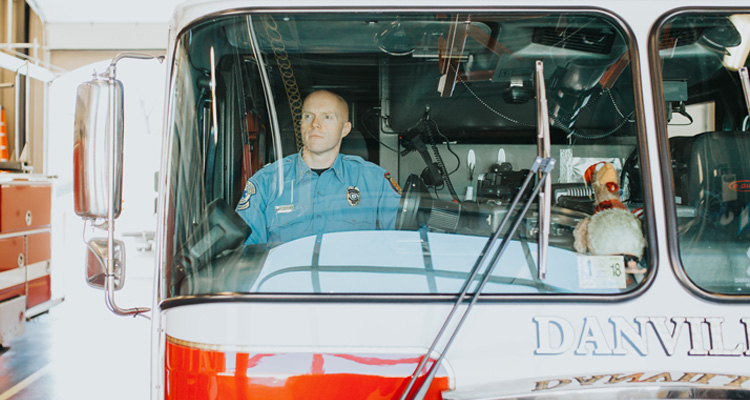 by showmag
Author Ambrose Redmoon once said, “Courage is not the absence of fear, but rather the judgment that something else is more important than fear.”  Firefighters are very familiar with fear, and the courage that comes with persevering through it.  Lieutenant James Satterfield is a member of the Danville Fire Department, serving as a Fire Lieutenant... Read More

The Family Birthing Center at DRMC

Author Ambrose Redmoon once said, “Courage is not the absence of fear, but rather the judgment that something else is more important than fear.”  Firefighters are very familiar with fear, and the courage that comes with persevering through it.  Lieutenant James Satterfield is a member of the Danville Fire Department, serving as a Fire Lieutenant and Assistant Training Officer.  The responsibilities involved with these positions are important and far-reaching.  “My time is split between being a company officer on Ladder 1 and the shift Safety Officer, while also serving in the Training Division,” says Satterfield.  “As the officer on Ladder 1, our crew responds to all fire calls and natural gas leaks in the city.  We also respond to other calls, such as car wrecks and medical calls, as needed.”  Satterfield continued, “as the shift safety officer, I respond to all building fires and major car wrecks to watch over the firefighters, medical personnel and patients to make sure we stay as safe as possible while performing our jobs to the best of our abilities.  In the Training Division, I work alongside another Lieutenant on A shift to develop, coordinate, and teach classes to the entire shift.”  Satterfield willingly admits, however, that it is a team effort.  “I am fortunate to work with a great group of folks that are extremely talented which makes my job very rewarding.”

A man of faith, Satterfield is very active in his church, Hope Church Halifax, where he serves alongside his wife, Kelley, in the children’s ministry, Hope Village.  “We strive to show kids the love of Jesus,” Satterfield said. He is also a fitness enthusiast and enjoys running and Crossfit. “I enjoy 5K races, especially the Dirty Dan Dash mud run the city offers,” he said.

Satterfield is invested in this region. He has lived in Pittsylvania County for the vast majority of his life. He and his wife have a two-year-old son named Noah, and both of their families live in the area. Satterfield believes the City of Danville is on the right track, as well. “In the past 10 years, Danville has done a great job of refuting the negative image that was painted by many of the local citizens,” he said.  “I find that the city is big enough to support the needs and desires of my family, while not losing its small-town feel.”

Satterfield and his family frequently visit the city’s parks, Riverwalk Trail, Farmer’s Market and Carrington Pavilion.  “We find we don’t need to go outside the city to shop and we love the River District and its unique environment,” he said.

A lot of work has been done in the past several years to position Danville to succeed in the future. Satterfield believes that work is paying off. “With the momentum, I’m seeing in the River District and the numerous economic development announcements that have recently been announced, I believe the city has a bright future.” That bright future exists because of great people like Lieutenant James Satterfield.