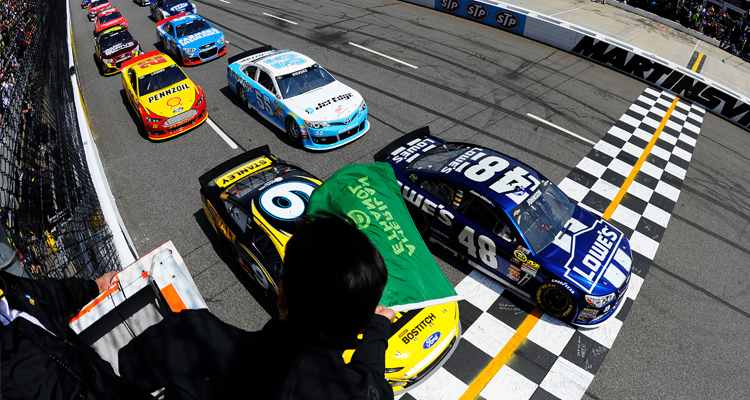 by showmag
Spring race week at the iconic Martinsville Speedway is almost here and Martinsville-Henry County is ready to open our town to the thousands of NASCAR fans who will move in for the week. Have you ever experienced the short-track racing first-hand on the half mile of mayhem? Has it been a while? Or do you... Read More

Spring race week at the iconic Martinsville Speedway is almost here and Martinsville-Henry County is ready to open our town to the thousands of NASCAR fans who will move in for the week. Have you ever experienced the short-track racing first-hand on the half mile of mayhem? Has it been a while? Or do you visit the track on a regular basis? Whatever the case may be, the excitement is in the air as we patiently await the activities of the STP 500 weekend, and we want you to be a part of it.

Recently, Martinsville Speedway won awards for “the Best Two Races of the 2017 NASCAR Monster Energy Cup Season,” as voted by the fans.  What does that mean you may ask? That means that between all the high-octane action at every NASCAR track during last year’s season, fellow NASCAR fans said their top two favorite races were the STP 500 and the First Data 500 at Martinsville Speedway. So, when we say we think you will love our track, you don’t have to just take our word for it.

The STP 500 is Sunday, March 25 and is the first short-track race of the Monster Energy NASCAR Cup Series season. Last year, Brad Keselowski held off Kyle Busch for the victory in the race that was voted by fans as the second-best race of the season; only behind Martinsville’s fall race.

What time do I arrive? Where do I park? What can I take in? How do I dress? We can answer these questions for you, but should you need more background information, be sure to call the Martinsville-Henry County Visitor Center at 1.888.722.3498 or the Martinsville Speedway at 1.877.RACE.TIX.

One of our most commonly asked questions is, what time should I arrive at the Speedway? This can be a difficult question. Depending on what pre-race activities you are interested in, that time can vary significantly. The STP 500 officially begins at 2:00 p.m.  Allow yourself time to park, find your seats and browse the pre-race activities and demonstrations as well as the souvenir and hospitality area beforehand. As a local NASCAR & Martinsville Speedway fan, I usually am at the track between 8 and 9 a.m. on race day. Don’t worry about arriving too early because there is always lots of entertainment leading up to the race.

Fan gates officially open at 9 a.m. Be sure to look for the VisitMartinsville team at the Speedway and around town throughout the week and weekend. We can provide you with local information and will be giving away free souvenirs.

The concession stands are wonderful but if you choose to bring your own snacks and drinks, remember that coolers can be no larger than 14″ X 14″ X14″ (wheels and telescoping handles are not permitted).

As far as dressing is concerned- have layers and dress comfortably. The average daytime high in Martinsville in late March is around 65 degrees.

If you have visited the track or ordered your tickets online already, you should have received the official Martinsville Speedway Fan Guide which covers many topics of interest to help your race day experience flow more smoothly. Information such as cooler/bag limitations, parking information, handicap accessibility, facilities map, etc. is included.

Even though this is your first time attending a race at the Martinsville Speedway, I’m sure you have heard of The Famous Martinsville Speedway Hot Dog. No trip to the speedway is complete until you’ve had one, or two, or three…  Did you know many of the NASCAR drivers and team members keep a running tally on the beams in the pit area of how many hotdogs they’ve eaten over the weekend?

If you are close enough to the area, you may stop by the Speedway to purchase your tickets if you haven’t already done so. The ticket box is open Monday through Friday 9 a.m. to 5 p.m. Tickets for the race start at $46 for adults and are now on sale. To purchase tickets, call 877.RACE.TIX or visit www.martinsvillespeedway.com.

New this year, Martinsville Speedway recently announced “Fast Fridays” fan events throughout the year, giving fans the opportunity to visit and to drive around the 0.526-mile track. For $20, fans get a dozen laps around the historic facility behind a pace car at speeds of up to 65 miles per hour. My Martinsville members will be able to participate in one Fast Friday event for free. Remaining event dates are: March 2, April 6, May 4, June 8, Friday, June 15, June 22, July 13, August 3, September 7, October 5, November 9, December 7, December 14, and December 21. If you can’t make it to Martinsville for the NASCAR races but you want to experience the speedway this year, get here for one of the Fast Fridays. Or come back after the STP 500 and get the whole experience.