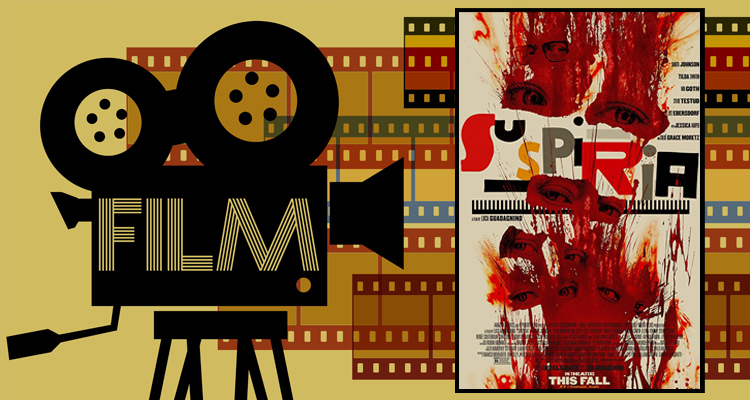 See it if you enjoy: Slow Burn, Disturbing Imagery, Artsy, Cults, Witches.
The Witch, Hereditary, Mother!, Black Swan,
Drag Me to Hell, The Evil Dead, The Haunting of Hill House.

I should start by saying I have not seen the original, but I will be watching it soon, so my palette was clean going into this movie. Suspiria is overall an impressive movie and will stick with me for a while. There is a lot to like here. For a two-and-a-half-hour movie it moves along at a nice pace that never leaves you bored. It does take its time throughout, but there is plenty to be terrified of between slower scenes. Character development is important and while it is not perfect, some of the characters are given the time needed to understand them. The cinematography is a nice mixture of old and new. There is a vintage feel to the imagery and yet it still feels like a current movie. The acting is superb. While, I have not seen the Fifty Shades movies I can only assume they are terrible which made me question Dakota Johnson’s part in this film. However, overall, I think she fit the role well and I enjoyed her performance as the lead. Tilda Swinton is always good, and it was nice to see her in a more restricted role. For all the craziness going on, she is mostly a normal character and portrays the star dancer become teacher well. The plot itself should be quite basic but is weaved together leaving enough mystery to keep attention until the third act reveals. More importantly, while I am uneducated in the mythos of this movie, it felt like the research and details were there. There is a lot of restraint used by the director when it comes to the frequency of gore and disturbing imagery, but when it is there, it is in full effect. I was never scared during this movie, but disturbed and uncomfortable constantly. This is one of those movies that brings fear days later when you find yourself in a dark alley at night or get an odd stare from a creepy old stranger. It is certainly deserving of a second viewing and the special effects are amazing. Some of the creature design will haunt my nightmares forever. The score is mostly good, although at times may seem to have some odd choices, but overall it worked for me. As someone with no experience in professional dance, it appeared to be impressive in terms of realism. You can tell the dance portions of the movie were given great attention. The real-world backdrop of Berlin in the late seventies added to the realism and took me somewhere unfamiliar. Suspiria is definitely not for everyone, but those that enjoy smart horror should find a lot to love here.

There was one thing that stood out in this movie above all else, but I cannot talk about it here. However, I will say that my wife did not notice it, so perhaps if you do not catch this particular thing you will not be distracted like I was. Aside from that, there is not much bad in my opinion. Those with a weak stomach will want to avoid this movie as the imagery is intense throughout. The focus can be a bit choppy at times, leaving the main character behind to follow supporting characters, but overall most scenes are relevant to the story. There are some feminist messages here, but they are not forced upon us and are not invalid. The male character in this film has a subplot that feels a bit irrelevant, but perhaps upon a second viewing will make more sense. The mythos can be hard to follow at times. There is a lot going on and the final act in particular has a lot of layers to dig through. On top of that it is as intense a scene as I have witnessed. The acting is so superb in this movie, but I did feel Chloë Grace Moretz’s performance was a bit of a weak link. It may have been her accent or that she was going back and forth between English and German, but something felt a little off in her scenes. Fortunately, her role is more important to setting up the plot and she is not on screen a lot. So, without speaking on the biggest issue I had, majority of the bad here is based on what a person can stomach.

The Ugly:
[spoiler title=”Spoilers! If You Have Not Seen the Movie Stop Here!”]If you have not read anything online about this movie or looked carefully at the credits you may be unaware that Tilda Swinton plays three roles, one of which is Dr. Josef Klemper, the only important male role in the film. While I did not know he was played by Swinton until looking it up, I did know from the very first scene that the Doctor was an actor in makeup. So, for the entire movie I was distracted by this and hoping for some explanation or perhaps a twist that called for it. Unfortunately, there was no direct correlation to the plot and this left me empty at the end. I had thought about it the entire movie with no payoff. She did do a fine job portraying him and the effects are amazing. As I stated, my wife was clueless. Still, this one decision by the director threw off the entire movie for me, so I cannot justify it. There is some discussion online about the importance of three’s and the Freudian theory of id, ego, and superego. I believe the idea is that Tilda Swinton portrayed each of those three parts of the psyche. I certainly appreciate the depth of thought here, but it went beyond my thinking and left a distraction instead. Sometimes a concept should be just that. Additionally, I thought that there may have been something to the idea of an all-female cast, but there were two other male roles in this movie as well, so that did not even come to fruition. Others may argue that this decision added something to the meaning behind it all, but for myself it did not work. Beyond that gripe, there are things in this movie that work so well. The time period and geographical location took me to a place unfamiliar which only added to the creepiness of everything. There is a beauty to this movie that when combined with the utter horrific imagery creates something very visually appealing. The scene where Olga’s body is mutilated and crosscut with Susie’s dance will become an iconic scene in cinematic history. It is so gruesome and yet you cannot look away. It also teases at how far this film will go and makes even those with the strongest stomachs want to cringe. The twist at the end is nothing amazing, but certainly works. Things get so out of hand that it is hard to focus on the twist anyway. The entire scene is insane. We finally get to see Markos and her character design is phenomenal. What makes this final scene so great is that there is a follow-up scene. It is so crazy, had the movie ended here, I would have been left with this question of, “Did that just happen?” Instead we cut to the school after the chaos and get to see the “survivors” along with the cleanup as if to answer that question, “Oh yeah, that just happened.” It adds a terrifying realism as if this actually took place in history. Suspiria will not please everyone, but those willing to commit and buy into the art will find it unsettling and effective well after the credits roll.[/spoiler]