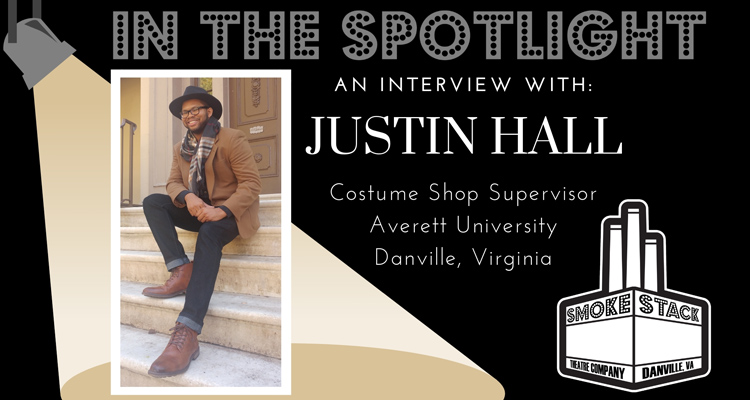 STC in the Spotlight! with Justin Hall

by showmag
Justin Hall Costume Shop Supervisor Averett University STC: What made you interested in theatre? Justin: When I was a kid growing up in Georgia, I loved going to the movies and to see plays. My mom would take my sister and I to the Puppetry Arts Center in Atlanta, to see storytellers at our public... Read More

Justin: When I was a kid growing up in Georgia, I loved going to the movies and to see plays. My mom would take my sister and I to the Puppetry Arts Center in Atlanta, to see storytellers at our public library and to other productions in our local community. When I was in middle school, I went to see a professional production of “The Nutcracker” in downtown Atlanta. Soon after that, I saw “The Wiz,” and as I scoured the playbill, I realized that these people were getting paid to do this! Once I discovered that you could make a living by putting together these stories using actors, costumes and sets, well, I was hooked! I started trying out for all the school plays in middle school and high school, I was in church plays and I even began writing my own plays for my friends and I to act out together in the backyard.

STC: Did you pursue an education in theatre?

Justin: I did! I was fortunate to get scholarships to attend Lees-McRae College in North Carolina, and quite honestly, because I was black, I was a boy and I could sing, I was exactly the demographic they were seeking for their program. All of my scholarships were based on my background as a performer, but in order to have a more diversified base of experience as a Theatre Studies student, and to keep from being a one-trick-pony, I had to choose a technical aspect to focus on as well. Since I already knew how to use a sewing machine and enjoyed playing with clothing and fashion, they placed me in the costume shop where I became a “stitch witch.” The head of the Costume Department noticed my eye for fabrics and design and set me on the Costume Design track, so by my junior year I was designing all the costumes for the one-act plays. By my senior year, I was performing in shows as well as designing and making costumes for the productions, so in a strange, roundabout way, I ended up basically getting a double education in Performing Arts Studies and Costume Design.

Looking back, it actually makes so much sense to me. My grandmother was a dressmaker who specialized in wedding dresses and when I was little, she had a special room that we were not allowed to go in. As I got older, she would let me come in the room, and I would see her drape and pin gorgeous fabrics for wedding dresses. I would help her pick up ribbons and count buttons and, most importantly, I watched as she magically transformed it all into beautiful gowns. That definitely gave me an appreciation for the process of costume design, and while I thought she was some sort of fairy godmother, I now know just how much work it takes to put together those creations! After all, clothing design is basically just pieces of cloth held together with string, but it’s the imagination and creativity of the process that really makes things special and that’s the part I love.

STC: So then, how did you end up here in Danville, VA?

Justin: Averett University brought me here through Brad Bass, their theatre department’s Artist in Residence. At the time I had been working for several years as the head of the costume shop for the Little Theatre of Winston-Salem. They had a full season of productions as well as a full season of Children’s Theatre, which we designed costumes for, probably 12 productions per year, and on top of that, our costume shop was open to the general public for various events and costume balls during the year. Needless to say, I was getting burned out doing what I loved! Brad had heard of my work and reached out to me when the position at Averett became available, so I went through the application process and put together my design portfolio, which they must have liked because they offered me the job! Upon meeting them, I felt immediately that Brad, Jackie Finney, Richard Breen and I were kindred spirits and would work well together to achieve the creative goals for Averett’s Theatre Department to move forward. I really felt an overwhelming sense of creativity and collaboration that I craved, both as an artist and performer. I love being part of a team that is all about cultivating creativity in our students and local area, and I’m just so thankful to be involved!

STC: Switching gears now, can you take us through the process you employ as you design for a production?

Justin: I always begin by reading through the script. I read it at least three times to see if there are any clues, either indicated by the playwright, or more subtle clues for the characters, props and settings. There may be suggestions for specific costume colors, or in the stage directions a character may pick up an item, such as a handbag or scarf, so I take note of all those things as I read through. There are usually context clues that come up for those things as I read the source material, and so a clear vision starts to form in my head. After that, I begin looking at sources outside the script itself for inspiration: if a play is set in a particular time period, I will start to look at artwork, films, fashion plates, and even listen to music from that period to immerse myself in that world. I find it essential to research what was going on historically, as well as the zeitgeist of a given period in history to inform myself. Even the psychology of colors varies so much between time periods and cultures, so I really have to do my homework in order to feel that I’m getting it right. After that, I go to the director and present my overall design thoughts and we talk about the psychology of the characters themselves to see if we need to explore specific colors or fabric textures to help them be expressed more fully.

The real fun starts when I begin hunting for fabrics! Not only do I explore fabric stores, but thrift stores can be a treasure trove of unique clothing and fabrics, such as old drapes and bed covers that simply need a little attention and redesign to be brought back to life in a new way. After that, I sketch my designs with the fabrics I have in mind. Some designers do it the other way and go out looking for items that will match their sketches, but I find that I usually need to feel and see the colors and textures before a specific design comes to me. It depends also on the organic nature of designing for shows, too. I may have found a gorgeous fabric that I love, but then I look at it against the sofa fabric on set and realize that the actor will possibly match or clash horribly when they sit on it, so adjustments sometimes have to be made. There are other productions; for example, “The Wizard of Oz,” that already have intensely iconic designs, and if you stray too far from that formula, you risk alienating your entire audience. I learned that the hard way when I put Cinderella in a dress that was not blue and all the little girls in their fancy blue Cinderella dresses who came up after the curtain call were so disappointed that her dress was not blue!

The last step in the process, once I’ve made the garments, is to get with the actors themselves. Just like a great costume designer can help bring a character to life through an actor, one that doesn’t take the actor into consideration can really hinder a performance. Some costumes are very heavy or tightly corseted, and those things have to be taken into consideration when an actor is preparing for the mobility of their role. Of course, during the final week of technical rehearsals, when every aspect of a production comes together, there are sometimes variables like stage lighting that may throw a curveball in the design, so it’s really important to work together toward solutions. It’s wonderful when you have a collaborative team that enjoys working together through the ups and downs of the production process.

STC: Last, but certainly not least, is there a “dream show” that you would love to design for or, as a performer, one that you hope to be part of during your career?

Justin: Oh my stars, that is such a hard question! It’s funny, because I’ve actually been able to take part in one of my “dream shows” already when I did “Dreamgirls” in early 2017 with the PHCC Patriot Players. There’s just something about the aesthetic of “Dreamgirls,” with its gorgeous costumes and starring people of color during the 1960s, when Motown and Diana Ross reigned supreme. I did both the costume design, as well as perform in the show, so that was definitely a bucket list experience for me! I would love to design for “The Wiz” someday; even though I’ve already done “The Wizard of Oz,” there are some unique design differences that would be so much fun to bring to life in “The Wiz.” Don’t get me wrong though, turning yoga mats into the Tin Man for the classic “Wizard of Oz” was very interesting, and I love doing costumes for the big musicals, those are just so much fun to work on!

Honestly, the concept of my “dream show” changes because I become obsessed with whatever I’m currently working on. I truly like to make each show that I’m working on be my favorite show in that moment, so that when I’m up to my neck in the details of my work, there’s still a passion there to bring my best work to the table. In that respect, I guess I don’t really have a “dream show,” because I get to “dream up” whatever I’m working on and bring those dreams into reality. I guess that makes me a fairy godmother after all!