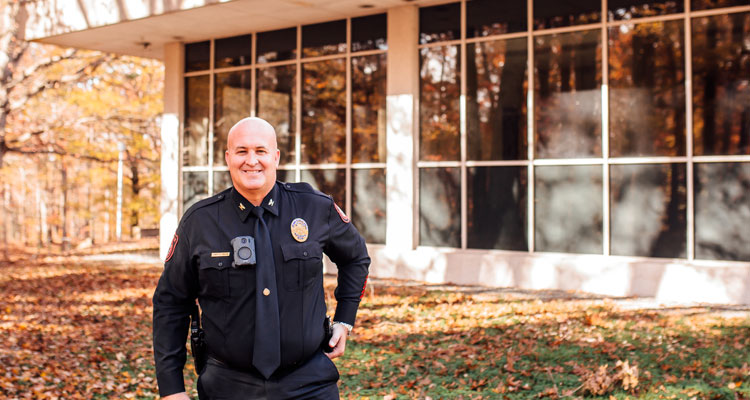 Scott Booth moved to Danville in early 2018 to become the City’s chief of police.  He grew up in North Cumberland County, Virginia. After graduating high school, Booth spent six years in the Army, deploying overseas several times, including duties in Operation Desert Shield/Storm. After the Army, Booth joined the Richmond Police Department, where he spent nearly two decades rising through the ranks, before taking a chief’s job in the Washington, DC area.  After a short time working for the federal government, Booth returned to what he loves—serving a community and trying to make it better.  His wife Julissa also enjoys serving and works for the Haven as a sexual assault advocate. Booth has a bachelor’s degree from the University of Richmond, a master’s degree from Virginia Commonwealth University, and is currently finishing his doctorate in Criminal Justice.

Showcase caught up with Chief Booth to find out why community service is so important to him.

Showcase Magazine: How do you define community involvement?

Scott Booth: Community involvement is about getting engaged in the community.  Not standing on the sidelines.  If you want to see a change in the community—take action.  Mobilize people to become engaged and make things better.

SM: What inspires you to get involved in the community?

SB: People.  It’s always about people. People make a community great, and I like to think that by working together we can make great things happen.

SM: How do you balance life, work, and community involvement?

SB: I try to make time for family and hobbies, but it’s tough.  But I believe that you have to make a conscious effort to disconnect once in a while and just focus on yourself and family.  Work and community involvement go hand-in-hand with me, so I would like to think I can’t have one without the other.

SM: What is the best piece of advice anyone has ever given you?

SB: Don’t be something that you aren’t—be yourself.  I believe that if you are authentic and have a relatively high level of self-awareness, you will be successful.

SM: Who are your real-life heroes and why?

SB: Most of my heroes are chiefs that I have worked for and with.  I have been lucky enough to work around some phenomenal leaders, leaders that truly cared about making their communities a better place.  I would like to think that I have learned from their successes as well as their failures.

SM: What is it about Danville that makes it special to you?

SB: Danville is special for many reasons.  Although I’m not from here, I have found it to be a courageous community that steps up to the challenge time and time again.  Danville might get knocked down, but it always gets back up again.  It is resilient and truly is the “comeback city.”

SB: New opportunities for the city.  An end to COVID.  Building a new police department facility that the community can be proud of.

SM: Do you have a favorite quote, and if so, what is it?

SB: Don’t let perfection get in the way of progress.  Followed closely by, “action is always better than inaction.”

SM: What do you like to do outside of work and volunteerism?

SB: Ride my motorcycle, read, and play with my two awesome dogs.

SM: What is your idea of happiness?

SB: Making things better.  Confronting a challenge with a team and finding an innovative solution to solve a problem in the community.

SM: What are your visions for the future of Danville?

SB: Danville has such a bright future.  For the police department, I see us continuing to work with our community to reduce crime and effectively engage and problem-solve with residents in all of our neighborhoods.  We are getting ready to start what we are calling “Neighborhood-Oriented Policing” in January 2021.  It is basically a continuation of our community policing model, but holding ourselves even more accountable to the community that we serve.  Expect more interaction from police officers and supervisors, and definitely more problem solving on neighborhood issues that affect the lives of our residents.