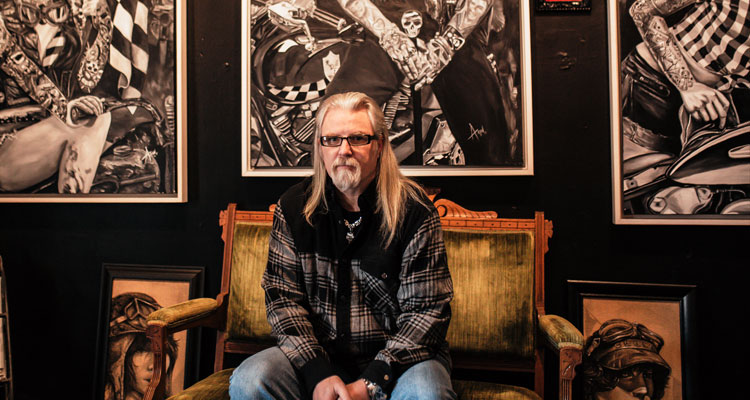 Every Tattoo Has a Story

by showmag
Inside Harry Aron’s Artistic Process Say the late Hank Aaron was your childhood hero and his recent passing has inspired you to get a tattoo marking the significance he held in your life. After doing a little Internet research or knowing from personal experience, you decide to go see Henry Aron at Harry’s Tattoo Shop... Read More

Say the late Hank Aaron was your childhood hero and his recent passing has inspired you to get a tattoo marking the significance he held in your life.

After doing a little Internet research or knowing from personal experience, you decide to go see Henry Aron at Harry’s Tattoo Shop off Westover Drive in Danville for your perfect tattoo.

You walk in, tell Aron what you’re looking for to which he’ll respond: “What does Aaron mean to you? Why do you want a tattoo of him on your body?”

Welcome to the beginning of Aron’s process.

“I’ll talk to you about what the tattoo means to you before anything else,” Aron said. “Most people don’t understand that if you want a tattoo of Hank Aaron, you don’t have to get a portrait of Aaron. It could be something as simple as just tattooing 715 with a bat running through it or a baseball with 715 on it. Sometimes less is more.”

Once Aron takes a few notes, he sits down and studies them, making sure he understands the emotions and stories behind the tattoo. From there, he moves to his drawing board and, in the spirit of a great novelist, begins outlining the tattoo.

“Every book has an outline, and every tattoo has an outline, and you have to have that outline when you’re doing tattoos because there are so many working parts of a tattoo,” Aron said. “They all have a common denominator, and that’s the story you’re trying to tell. Once I’ve done the outline, I sit down at the drawing board and it all flows out of me.”

All writers need a good story to produce something worthwhile, and Aron has found the same in drawing tattoos. In fact, developing a good story is so ingrained in his artistic process, it’s a bit he mentions to all his customers, but especially those requesting sleeves.

“When I do a sleeve, I tell people to not put like 14-19 different images on there that might be peanut butter and jelly here, and Chevrolet there,” he said laughing. “Do one theme and make it work. Tell a story. That way when somebody on the street notices it and runs up and asks you about, you can tell them that’s your story and that’s what tattoos are about for me. The stories.”

The most surprising part of Aron’s process, though, would have to be his choice of music.

While it’s easy for some to categorize those with tattoos or those that do the drawing as heavy-metal rockers or rappers, Aron is proof that isn’t always the case.

“When I tattoo, 99 percent of the time it’s K-Love and Spirit F.M. and stuff like that. Every once in a while we might play some old, old country music, but it’s rare,” Aron said, laughing. “That’s just me. It really helps with the process. It relaxes my customers. There’s something about the words and music that has that effect.”

Lately, he’s finding the music sticking with the customers as well.

“I’ve had several times here recently where I’ll have the client sitting there and they’re not talking on their phone, or trying to take a video, or a picture, a song will come on the radio and they’ll be listening to the words and those words will speak to the tattoo or speak to the moment that inspired their tattoo,” Aron said.

“It’s like, ‘Pow,’ that’s why they’re doing this tattoo. That’s what this tattoo means. Here recently, I’ve had several of those times.”

However, that doesn’t mean Aron doesn’t mix it up a bit from time to time, especially when he’s alone planning or sketching a tattoo or when he’s working on one of his incredible pencil drawings or paintings.

“Sometimes, if I come over to the store at night, I might play some loud jazz music or 80s’ rock and that’s when I can really get into my painting,” Aron said. “I listen to Mozart, Def Leppard, all sorts of stuff. When I do my paintings or drawings, it’s usually a mixed bag of Mozart or I might put on some loud jazz or some old, old country music.”

Aron has a variety of influences and inspirations as well. His artistic journey began when he was five-years-old, beginning with some simple pencil drawings. By the time he became a teenager, he was helping draw a comic strip for his hometown newspaper and by the time he was 14; he had landed his first commercial client.

Encouraged by the success, Aron attended art school, eventually earning his bachelor’s degree in fine arts, while studying the works of the Maltese painters, Rembrandt, and the painting philosophy known as Pointillism — the technique of painting in which small, distinct dots of color are applied to patterns to form an image.

“There’s so many classical artists I studied in high school and college, and I liked their styles,” Aron said. “The Maltase’s, Rembrandt. Rembrandt was top notch in my mind. My fine art style in high school was Pointillism, so all my paintings in high school were of that style.”

When Aron got into the tattoo business 20-plus years later, he sought tattoo artists who found the same inspirations in classical, fine art, and had a similar education to him as well. Artists who dabbled in black-and-grey coloring much like Aron’s pencil drawings in high school.

“I really admire those guys because their styles matched my pencil style and my drawings and artwork from high school, and that’s what I transferred into my tattooing,” Aron said.

Even though he has influences, Aron ended the interview by making one thing clear:

“The funny thing is, my tattoo style and my fine art style don’t really match any of my influences,” Aron said. “I have to go out and do me. I can’t follow other people’s styles. I can never really re-create what somebody else does or follow the Joneses’.”