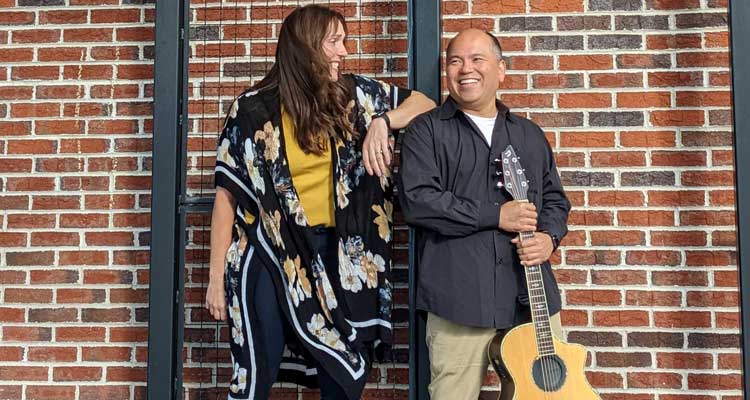 by Paul Seiple
By day, Norm Aquilo and Sarah Moss teach our children. Aquilo teaches at Sacred Heart Catholic School, while Moss is at Twin Springs Elementary. Aquilo is also the director of music at Sacred Heart Church. He added, “I have a few guitars, two dogs, and a mortgage.” Outside of teaching, Moss enjoys traveling, staying active,... Read More

By day, Norm Aquilo and Sarah Moss teach our children. Aquilo teaches at Sacred Heart Catholic School, while Moss is at Twin Springs Elementary. Aquilo is also the director of music at Sacred Heart Church. He added, “I have a few guitars, two dogs, and a mortgage.” Outside of teaching, Moss enjoys traveling, staying active, and spending time with her husband and daughter.

At night, the duo shares their love of music, performing as Norm and Sarah. They also play together with fellow musician Cameron Owen in Third Story.

Moss, who joined her first band at age 16, has been performing for about 25 years. “Norm and I met at an open mic in 2005, right after I moved to Danville from Pennsylvania. We became fast friends and have enjoyed making music together since then,” she said.

Aquilo added, “I started out playing acoustic music when I was 21, so it’s been 33 years. Sarah and I have been working together for the last sixteen years.” He caught the musician bug in the ninth grade while attending a youth convention sponsored by his church. “An acoustic duo performed, and they played the worship music that weekend as well. On Saturday night, a live band performed at the dance. It was my first taste of live music. One nun who taught at the school loaned me her guitar when I mentioned I was interested in learning. I’ve been practicing ever since.”

Piano lessons in elementary school were Moss’s introduction to music. “My piano teacher realized I could sing, so he started working with me on playing and singing at a young age. Unfortunately, I didn’t keep up with the piano, but the singing stuck with me,” she said.

There have been several pre-show rituals in the sixteen years of performing together. Moss said, “I have to work really hard to compartmentalize all other parts of my life when it’s time to sing. At the very least, I need a few minutes totally alone so I can shift out of ‘mom’ and ‘teacher’ mode before we play.” Aquilo’s rituals are a little different. “I used to eat nachos with extra jalapeno peppers. Nowadays, I just go over the equipment I need that night and pack everything neatly so I can set up quickly. If it’s going to be a late night, I take a short nap. If I’m having trouble getting my energy level up, I might listen to ‘Lunatic Fringe’ by Red Rider or ‘Only the Young’ by Journey,” he said.

Creativity is an integral part of musicianship. Aquilo keeps the creativity flowing by composing pieces even when he’s playing cover shows. “If I just noodle around in different keys and work some scales and arpeggios, new things always come out. We recently stumbled into some fun arrangements for familiar hits. I guess the answer for me is to keep learning about music and to take musical chances,” he added.

Songwriting is another branch of the musical tree. Aquilo admires many songwriters. He recommends listening to James Taylor’s Greatest Hits. “Maybe it’s cheating to recommend a compilation album, but there’s something special about that group of songs. I am often surprised that people I meet love the songs I don’t care for as much,” he said. When asked about dream collaborations, Aquilo sticks to the songwriters with a caveat. “I suspect that most would not be easy to work with. Daryl Hall seems like somebody who would be good at sharing a pen.” Moss added, “There are a lot of vocal powerhouses out there I’d love to stand next to.”

With many years of experience, the duo has some advice for aspiring musicians. Moss said, “to do this for a long time, you’ll need more than talent. Be trustworthy and consistent. When you play for people, you are often a part of some really important moments, and it’s really an honor to be invited into that.” Aquilo added, “Music is a conversation, not a competition. Learn the language. Learn how to read if you are serious about working in some capacity. You will find there are people who you don’t want to have a musical conversation with and that’s okay, too.”

Playing for a live audience is gratifying. It’s something that Norm and Sarah will never take for granted. “I am continually inspired by the people who come out and support live music in the area. The connection people have to the music and the people that make it is really special,” Moss said. Aquilo agreed, adding, “It’s incredibly rewarding when an audience is transported by music. Sometimes they share very personal memories.”

Looking to the future, Moss joked it may be time to retire soon, before saying, “As long as the phone keeps ringing, I guess we will still be playing together.” Aquilo expects he will delve into more piano music. “It’s easier to play for the long hours of a cover show when you are not using the same hand muscles all night,” he said. After a moment, he continued. “Five years ago, I would have said that I wouldn’t be performing anymore, so I hope there’s a place for us, just like there always seems to be a place for a basic black cocktail dress or a well-tailored blazer.”

What Makes a Community Strong?
Previous Post
The Community That Built Me