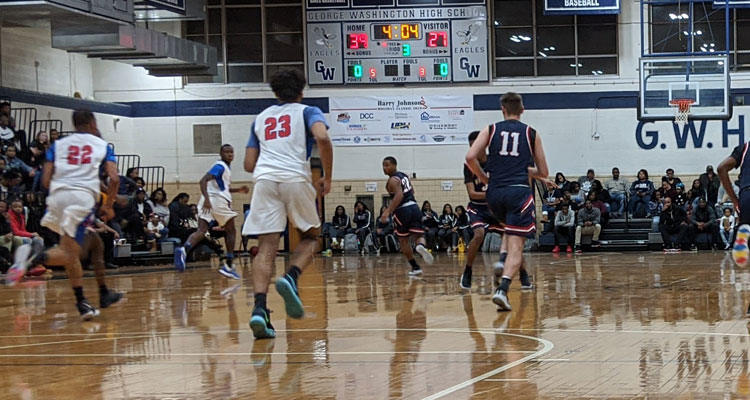 Behind the Scenes of The Harry Johnson Holiday Classic

by Paul Seiple
Much hard work goes into a basketball tournament with the magnitude of the Harry Johnson Holiday Classic. The tournament takes place for three days at the end of each year, but the event is a year-long process. “The committee will start meeting in mid-January to evaluate the tournament that was just completed while it is... Read More

Much hard work goes into a basketball tournament with the magnitude of the Harry Johnson Holiday Classic. The tournament takes place for three days at the end of each year, but the event is a year-long process. “The committee will start meeting in mid-January to evaluate the tournament that was just completed while it is fresh on our mind. Following the January meeting we work on the next tournament all the way up to the week of the tournament in December,” Tournament Co-Chair, Shelby Irvin said. Co-Chair, Sylvia Brooks added, “The committee comes together once a month to make sure we have the teams, and all needed to make this work smoothly.”

Former coach and athletic director at George Washington High School, Reid Taylor researches and fills the brackets with quality teams to ensure an exciting tournament. The committee comprises sub-committees with the purpose of filling in the gaps. “The committee consists of members who have expertise in certain areas such as officials, finance, hospitality, half-time events, sponsorships, advertising, security, and safety,” Irvin added.

Basketball has been a large part of Irving’s life since childhood. “I grew up playing basketball with my family, which lead me to playing on organized teams. I played at Tunstall High School and Ferrum College. After college, I still had basketball in my blood. That transitioned to coaching at Averett College now Averett University,” Irving said. She also officiated in recreational leagues in Danville. “When I first heard of bringing the tournament back to George Washington High School, I immediately called Mayor Alonzo Jones and asked to be a part of the committee.” Mayor Jones was aware of Irving’s experience and granted her request. Joining the HJHC team was more than basketball for Irving. It was about bringing back part of history. “I wanted to be a part of what the residents of Danville and surrounding basketball fans wanted back during the holidays,” she added.

Brooks wanted to be part of the Classic for the youth. “The tournament is an excellent resource to provide a safe place for our youth to enjoy themselves and build positive relationships within the community.”

The HJHC is more than a weekend of games for basketball lovers. “It is the Danville community coming together to better where we work and live,” Brooks said. Irving continued, “This tournament is a wonderful opportunity for participating schools and fans to come together and play a game that teaches individuals teamwork, responsibility, accountability, sportsmanship, and trust,” Irving said. Individually, those components help to shape children. Together, they create success in schools, community, jobs, and family. “The HJHC committee is all about the student’s well-being, giving all the opportunity to spend time with friends while cheering for their prospective schools,” Irving added.

Each year, the HJHC evolves into a bigger tournament. Brooks and Irving gave a sneak peek at this year’s tournament. Attendees should know beforehand; game tickets and concessions will be cash only. “The day will start off with a challenge game between teachers and parents. This will be a game of laughter and good sportsmanship,” Irving said. Brooks added, “It will be an awesome experience where attendees can get involved with pre-game and half-time games.”

The girls’ tournament will begin after the middle school games. “The girl’s teams consist of GW, Tunstall, Gretna, and Orange County, from Orange VA,” Irving added.

Boys’ varsity takes the stage in the evening sessions. “This year we will have GW, Westover Christian Academy, Tunstall, Chatham, Gretna, and Norfolk Academy. GW will be eager to return and obtain the Harry Johnson Holiday Classic Championship trophy after losing to Green Run last year 52-55 nail bitter,” Irving said.