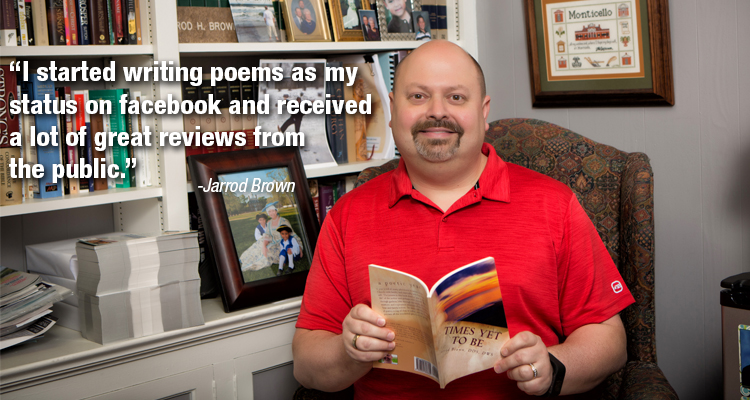 Times Yet To Be

by showmag
Many things fuel Jarrod Brown. Science — since 1998, he has practiced dentistry at 1108 Main Street. Family — in 2001, Brown married Lisa Tunnicliff, and the couple has two sons, Trevor who is thirteen and Nathan is nine. Faith — in 2008, Brown earned his Doctorate of Worship Studies from The Robert E. Webber... Read More

Many things fuel Jarrod Brown. Science — since 1998, he has practiced dentistry at 1108 Main Street. Family — in 2001, Brown married Lisa Tunnicliff, and the couple has two sons, Trevor who is thirteen and Nathan is nine. Faith — in 2008, Brown earned his Doctorate of Worship Studies from The Robert E. Webber Institute for Worship Studies. His family is actively involved at First Presbyterian Church where he sings solo as well as with the choir. Singing sparks the creative side of Brown. He has released two Christian music albums. Recently, Brown released his first book of poetry.

Brown says, “My book, Times Yet To Be, is a collection of both Christian and secular poetry. It’s organized by the seasons of the year (winter, spring, summer, fall, and back to winter), but also has a focus on the celebrations of the Christian Year calendar (Advent, Christmas, Epiphany, Baptism of the Lord, Transfiguration Sunday, Holy Week, Easter, and Pentecost). I also celebrate American holidays and some Scottish holidays (due to my Scottish heritage).” Many of Brown’s poems invoke images of nature, sounds, and everyday life. “There is also one nonsense poem entitled ‘Alphabetical Alice’ which is inspired by my love of the Alice in Wonderland books by Lewis Carroll. There are poems dedicated to people special to me, such as my late father, my mother, my wife, my kids, a friend in the nursing home in NC, and a fellow writer, Cindy Morgan. Some of the poems rhyme, some do not. Several are acrostic poems, meaning the first letters of each line spell out a word or phrase. I was inspired to write these by the Psalms in the Bible, many of which have a similar format in the original Hebrew.”

The inspiration to create through song lyrics and poetry began in high school for Brown. Through the years, he amassed an impressive collection of poems. Brown also used social media as a medium to practice his creativity. “I started writing poems as my status on facebook and received a lot of great reviews from the public. So I thought it would be a great idea to collect poems both old and new and publish them as a form of encouragement to others. It was a great way for me to share my faith in Christ as well as to share my quirky way of looking at the world. It was also a great challenge to me to write the poems and keep them positive as I was going through a period of depression after my father’s unexpected death. They have acted as a catharsis for me and helped me to focus on all the blessings in my life. God has been good to me, so I wanted to share that with others.”

Brown’s writing influences are eclectic. He cites British fiction and poetry as inspirations. Brown adds, “I also love the works of American poets Emily Dickinson, Kelly Cherry (a former poet laureate of Virginia and dear friend), Maya Angelou, and James Weldon Johnson. I study translations of ancient Welsh poetry which is very intriguing. In addition, I am heavily influenced by my friend and Christian songwriter, Cindy Morgan, to whom I have dedicated a poem in the book.”

Brown sees releasing more books in his future. “I am planning on writing more poetry, including a poetic version of the Pauline Epistles from the New Testament. In addition, I have ideas for several children’s books which are in the works. Also, I would like to write a novel about a monk character that I have created named Brother John. It will be an end-times Christian novel about a conspiracy to discredit the Church. Suspense, drama, murder and mayhem…just like a good movie.”

Times Yet To Be is available in paperback and kindle editions. You can find it by going to Amazon and searching “Jarrod Brown” or by stopping by Brown’s office at 1108 Main Street. More of Brown’s poetry is available on his blog at www.jaybeeinbigd.wordpress.com.