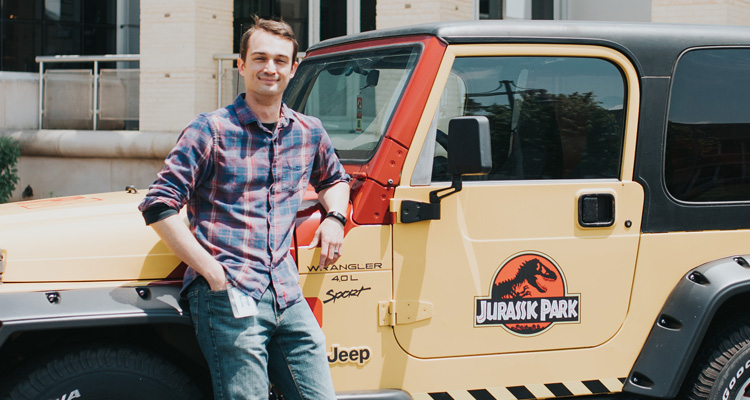 A Love for Ancient Worlds

by showmag
If you’ve seen a yellow and red Jeep Wrangler cruising around Martinsville or Danville with a Jurassic Park logo on the side, you’ve probably seen Alex Hastings and his wife Katie. The Jurassic Park-themed paint job and detailing was a gift from Katie’s parents in 2016. The Jeep had been at her parents’ house, in... Read More

If you’ve seen a yellow and red Jeep Wrangler cruising around Martinsville or Danville with a Jurassic Park logo on the side, you’ve probably seen Alex Hastings and his wife Katie.

The Jurassic Park-themed paint job and detailing was a gift from Katie’s parents in 2016. The Jeep had been at her parents’ house, in Georgia, for nearly a year when they told Katie they were bringing it back to Martinsville. Hastings was away at a conference when Katie’s parents surprised her with the revamped Jeep. Hastings was just as shocked when he came home. “When I pulled up to the house, I was expecting a normal yellow jeep,” Hastings says. “It was just as much of a surprise for me to see a legit Jurassic Park jeep, decked out with big decals and everything. They did such a great job, and we’ve had a lot of fun finding other little bits to add to it.” The Jeep now has an amber mosquito gearshift and a Jurassic Park tag hanging from the rearview mirror. “It gets a lot of attention everywhere we go — it’s been so much fun,” Hastings adds. The Jeep will be on display during Dino Day at the Virginia Museum of Natural History this summer.

For as long as he can remember, Hastings has been interested in The Jurassic Period, also known as the Age of Reptiles. “The first Jurassic Park movie came out when I was a kid and 100 percent solidified what I wanted to do,” Hastings says. “Like most kids, I was enthralled by dinosaurs and everything about their ancient world. That fascination has never left me, so becoming a paleontologist has really been a lifelong goal.”

Hastings grew up in Vermont, but moved to Ohio halfway through high school. He would go on to earn his undergraduate degree from Penn State University and his Ph.D. from the University of Florida — both in geology.

Hastings and his wife spent two years living in Germany. In July 2015, he began work as a paleontologist for the Virginia Museum of Natural History. Katie also works at the museum.

Hastings loves his job for a number of reasons. It gives him an opportunity to travel, whether it be for field work, conferences, outreach events, or documentary filming. “There’s a lot of variety,” Hastings says. “I love that everything is centered on exploring the ancient world. I love dinosaurs and all the other things from long before humans ever walked the earth. It keeps me busy, but I love all of it.”

Hastings co-authored a study published in Proceedings of the Royal Society B titled “Tropical ancient DNA reveals relationships of the extinct Bahamian giant tortoise Chelonoidis alburyum”. The tortoise thrived in the Bahamas thousands of years ago. Extinction began shortly after humans occupied the islands. Fossils found deep within a blue hole, which is a water-filled sinkhole, have been preserved to the point that DNA is still intact. “Preservation like this is exceptionally rare, but we hope this paves the way for more ancient DNA to be extracted from other animals from the site,” Hastings says. “The study highlights the ability of these impressive reptiles to colonize island systems and shows that a previously unknown genetic stock gave way to both Caribbean and Pacific tortoises. Only recently, with human invasion into the Bahamas, did this unique tortoise of the Bahamas die out. Studies of the evolution of rare island tortoises can aid in conservation efforts, as well as provide a greater understanding of the keys to success and survival in island environments.”

Something else passionate to Hastings is a new exhibit debuting at VMNH during Dino Day. “The exhibit will feature full skeletons of Stegosaurus and Triceratops, plus a ton of other fossils that have never been on display at our museum.”

Moving forward, Hastings hopes to expand his field work into new areas and create a “network of volunteers” to help integrate more of the fossil lovers in Virginia into the museum’s network.
“Virginia has a lot to offer, and I’d like to explore its beaches, quarries, valleys and caves even more in the coming years,” Hastings says. “There are hundreds of millions of years represented in the rocks and sediment of Virginia that still hold clues to life from the past, and I find all of it fascinating.”

Regardless of how he grows his career and where he goes, Alex Hastings will always be an explorer at heart.

I’ll Play Wherever They’ll Have Me
Previous Post
June 2017: Sponsored by VMNH