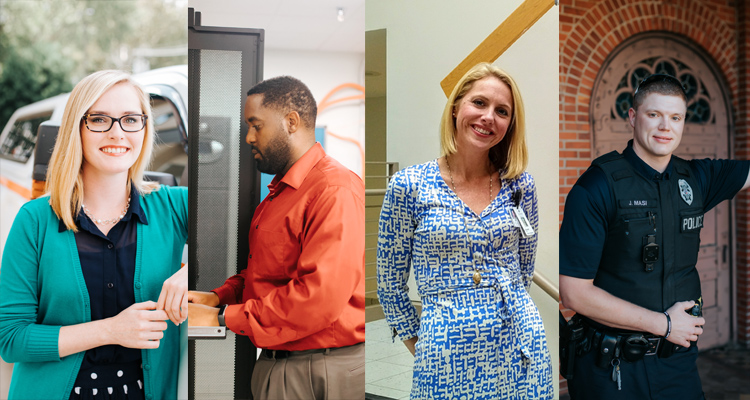 by showmag
Elizabeth Harris   Elizabeth Harris serves as the Market Marketing Director for SOVAHealth, overseeing marketing and communications for both Memorial Hospital in Martinsville and Danville Regional Medical Center. The past months have been a challenging time for her and her coworkers as they have tirelessly worked to complete the re-branding of both hospitals to the... Read More

Elizabeth Harris serves as the Market Marketing Director for SOVAHealth, overseeing marketing and communications for both Memorial Hospital in Martinsville and Danville Regional Medical Center.

The past months have been a challenging time for her and her coworkers as they have tirelessly worked to complete the re-branding of both hospitals to the SOVAHealth partnership. She and her team create print advertisements, commercials, social media strategies, and a variety of other marketing materials. “There aren’t enough hours in the day,” Harris says. “Working to develop those materials is a big project.”

Harris was born and raised in Martinsville and earned her undergraduate degree in English from UVA-Charlottesville. After graduation, she worked as a paralegal for an environmental defense firm in Washington D.C., but eventually found her way back to Southern Virginia. “I never pictured myself living back in Southside Virginia, but I ended up getting a job as a pharmaceutical rep, which was my foray into healthcare,” Harris says.

Harris always kept sales and marketing in the back of her mind throughout her other jobs, but never pursued it until after earning her M.B.A. from Averett University. Shortly after her graduation from graduate school, she began working as the marketing director at Memorial Hospital in Martinsville, assuming oversight of both facilities in May 2017.

Harris says the most rewarding part of her job is working in the same place she grew up. “When I left this area 15 years ago, I was seeking a much bigger urban setting with a lot of anonymity.” “As I’ve grown older and started a family, it’s amazing to live, work, and play where you grew up because there’s such an amazing support system, and you’re able to help out your family friends and neighbors.”

Philip Hayes is a Danville native and a 2004 graduate of George Washington High School (GWHS). After graduation, he went on to receive his bachelor’s degree from Norfolk State University and master’s from Purdue University — both in computer science.

Hayes works as a software engineer and database administrator for the Noblis Center for Applied High-Performance Computing. He is responsible for double checking data that comes from the company’s headquarters, making sure everything is correct before sending that data out to its clients.

Noblis Headquarters is in Reston, Virginia, and 90 percent of his team are there while he is here in Danville. He said this makes communication difficult at times. “I can’t always get that face time with them,” Hayes says. “I have to do it either using a phone call or with Skype.”

Even with the distance, the flexibility of his job is the best thing. One day he can work from his office, another he can work from home. “If I have a good internet connection and great communication with my team, I can work anywhere. I enjoy not having to sit at a desk from 8am to 5pm all the time,” Hayes adds.

Hayes’ passion for computer science began during his time at GWHS through its Technology Studies Academy, which worked to get students interested in networking and computers. “When I was there, it was just starting to grow,” Hayes says. “I just fell in love with technology and computers and started to pursue that as my major.”

School gave Hayes a base understanding of his field, but he has grown tremendously since starting his career. “In school you do mostly bookwork, just trying to pass the grades and understand the basic stuff,” Hayes says. “Working—getting that hands-on interaction, collaboration, and development—has taught me lessons I couldn’t learn in a classroom.”

Since receiving his M.B.A., Hayes hoped to obtain a leadership position at Noblis and eventually start his own business as well.

The Danville Life Saving Crew (DLSC) is a staple of this community, and Erin Gusler plays no small part in their service to the people of Danville. Gusler is the Public Information Officer (PIO) for the DLSC, handling public relations and acting as a liaison between local media outlets and the crew. Her responsibilities range from preparing press releases to managing DLSC’s social media accounts to taking photos at community events. “Even though I am not on the trucks running calls, I’m glad I get to publicize those who are and remind the community of what an amazing job these men and women do,” Gusler says.

Gusler graduated from Averett with a bachelor’s degree in communication studies/journalism with a minor in English. She chose that degree because of her love for writing, photography, and graphic design. “I enjoy being behind the scene and making a difference in the community,” Gusler says. “Being in communications allows me to do what I love on a daily basis.”

Gusler attributes her time at Averett for preparing her for the position, teaching her the skills she needed and readying her attitude for whatever situations she encounters. “At Averett, I learned that I can do anything I set my mind to,” Gusler says. During her senior year, she interned with 104.5 The Dan and produced materials for the DLSC. Those opportunities helped to build her resume and helped Gusler land a job in communications right after graduation.

Gusler has no plans of going anywhere anytime soon. “I love being a part of the Danville community and am grateful that Averett gave me the opportunity to make a positive difference,” Gusler says. “I plan to stay in Danville, work hard, and make an even bigger impact on those around me.”

Born and raised in southern New Jersey, the career path always led to law enforcement for John Masi. “The turning point in my life was September 11, 2001. I was child watching the news from home. I remember seeing the first responders running toward the chaos to help the civilians. Police officers and firefighters from my hometown suited up and headed toward Manhattan. The only thing I wanted to do was go help. From that day on, I wanted to be part of something bigger. I wanted to protect those who couldn’t protect themselves,” Masi says.

While in high school, Masi took over 30 credit hours in criminal justice and sociology. He enrolled at Averett University in 2010 and graduated in 2014. “I’ve been in Danville a little over seven years,” Masi adds.

A major in criminal justice/sociology and a minor in biology prepared Masi for a career in law enforcement. “Crime scene class taught me how to set off a crime scene, process evidence, and take photos of the scene as well as writing the initial report and solving the crime. Sociology plays a major impact while working as an officer, several classes in this field have shown me how political, economic, and social factors influence criminal behavior which ties into the psychology aspect.” To prepare him for the field, Masi participated in the Criminal Justice Internship program while at Averett. “I rode with officers for over 200 hours observing the job,” Masi says. In February 2015, he joined the Danville Police Department.

Averett brought Masi much more than just a degree. “While at Averett I met my fiancé Hannah who is now a special education teacher here in Danville. Hannah was also a member of the Averett volleyball team and graduated in spring of 2013 with a special education degree.”

Masi cannot envision being in any other career field. “Being a cop was always my dream. I’ve finally made it reality.” Masi hopes to become a part of the street crimes unit. “The unit has the potential of molding me into a better police officer in which I can learn from veteran officers to better my police work and excelling in certain areas of the job such that of narcotics work,” Masi concludes.