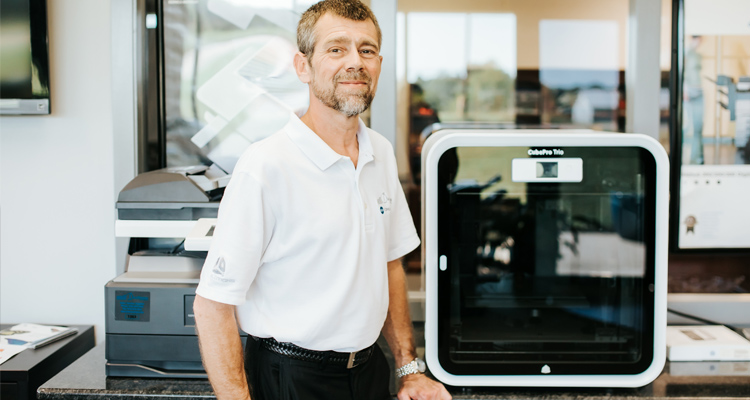 by showmag
On day on his talk show, Dr. Joey Faucette took a moment to talk about “DocuDave.” “He was referring to David Hobson, owner of Docusystems Co. Inc. Faucette praised Hobson, calling him “a rare find these days.” He spoke of Hobson’s good business model and great customer service. It’s those characteristics that have led to... Read More

A Perspective on Leading in Difficult Times

On day on his talk show, Dr. Joey Faucette took a moment to talk about “DocuDave.” “He was referring to David Hobson, owner of Docusystems Co. Inc. Faucette praised Hobson, calling him “a rare find these days.” He spoke of Hobson’s good business model and great customer service. It’s those characteristics that have led to a long, successful career for Hobson. This October marks 15 years of business for Docusystems. “We’ve come a long way in that time,” Hobson says. “We started as a copier dealership and have grown into production print. There’s a lot to learn. Production print is a different animal—different papers, different stock, and specific machine setup.”

Learning is one thing that keeps Hobson ahead of the ever-winding technology curve which has seen explosive growth in the 3D print market. “I was introduced to 3D printing two-and-a-half years ago at a seminar in California. I knew the market was going to take off, and I needed an understanding of it.” The 3D print market is a 20-billion-dollar industry, and it doesn’t seem to be slowing. “The Danville Public Library has a 3D booth, and the response has been overwhelming. The booth is not only used by kids, adults love it too. 3D is the wave of the future,” Hobson adds.

The great customer service Faucette mentioned is found in every Docusystems’ service call. The importance of excellent customer service was instilled in Hobson at early age when he serviced two newspaper routes. Hobson gained knowledge of timeliness and giving the best service possible. It’s something that has carried over to Docusystems. “We do things different,” Hobson says. “I love hearing someone say, ‘You’re here already.’ Instead of saying, ‘I called you two days ago, where are you at?’” For most of Docusystems’ service calls, the average response time is 48 minutes. “If a machine goes down, it puts a business or school in a bad situation. They can’t wait 48 hours to get back up and running, so our goal is to get them back in business as soon as possible,” Hobson says.

Hobson teams with the best in the print business. Docusystems is a Konica Minolta dealer. The popular Bizhub model fits its name as “the hub of your business.” “A Bizhub is an all-in-one product. It scans, copies, prints, faxes, and can even email. Take an average HP printer—it runs five cents on five percentage coverage. No one does five percent coverage. It’s more like 20 percent. You’re going to pay around $170 for a laser cartridge. I can put in a multifunctional device that will pay for itself at a penny a copy. A Bizhub can save space, time, and money,” Hobson says. The machines are dependable as well. Recently, Docusystems switched out a machine at local school that had four years of production without one service call.

Even with a vast knowledge of the printing industry, Hobson understands the need to always be a student. Twenty-five years ago, a friend offered Hobson a job in printing. “I thought duplexing was something Ric Flair did,” Hobson laughs. It didn’t take long for him to learn that duplexing meant front and back printing of a sheet of paper automatically. “Printing never gets stale. Whether it’s wireless, Bluetooth, smart phone apps, or 3-D advancements, there’s always something to learn.”

In a time when brick-and-mortar businesses are struggling, Hobson has found a way to thrive through learning and evolving. Docusystems is the only Konica Minolta dealer with state contracts in three counties and has amassed over 700 customers since opening its doors on October 2, 2002. As it celebrates another anniversary, Hobson reflects on success. “None of this would be possible without the support of others. I can never express how thankful I am to family, employees, friends, businesses, and the community for all the support they have shown over the last 15 years.”