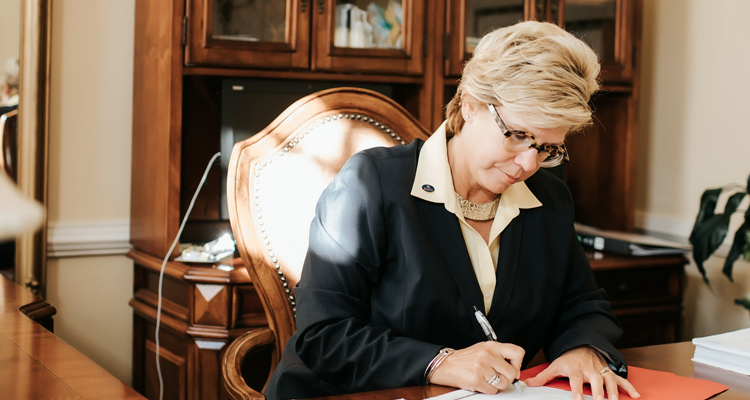 by showmag
In Danville, Averett University is known as “your hometown university.” It’s a title Averett President Dr. Tiffany Franks doesn’t take lightly. “I feel the label ‘hometown university’ is earned not given. It comes from tremendous community engagement and outreach on our part, and the things we do to enhance the quality of life in the... Read More

In Danville, Averett University is known as “your hometown university.” It’s a title Averett President Dr. Tiffany Franks doesn’t take lightly. “I feel the label ‘hometown university’ is earned not given. It comes from tremendous community engagement and outreach on our part, and the things we do to enhance the quality of life in the region. We take our responsibilities to give back to the region very seriously.”

Through community awareness and effort, Danville has embraced its hometown university. “It’s such a joy to see signs throughout the city welcoming students back and to see staff at restaurants wearing Averett gear on football Saturdays,” Franks adds. The North campus and Frank Campbell Stadium have become destination spots. Tickets to Averett football games are a hot commodity. “Every October, Danville lines Main Street with Averett University light pole flags to cheer on its hometown Cougars in their homecoming football game and often the light-up colors in the JTI Fountain are changed to reflect the Cougars’ blue and gold.”

Averett’s continued growth is leading to bigger and brighter things for the university and community. “I remember standing on the steps of Main Hall in May 2008 and saying, ‘When you think of Blacksburg, you think of VA Tech. When you think of Charlottesville, you think of UVA. I want Averett to be the thing someone thinks of when Danville is mentioned. I didn’t think that it would be easy. It would come from Averett accepting its responsibilities and living up to its responsibilities to give back to the community in so many ways,” Franks says.

A New Class, A New Record

In 2008, Averett had fewer than 800 traditional undergraduate students, this fall the number was in the 930, and the university welcomed the largest freshman class on record in its 159-year history. “Many of our programs, including nursing, aviation, and equestrian are running ahead of last year. We’ve launched three new sports that we expected to attract 40 more students, but we surpassed that by double digits. Those additions are more popular than we imagined,” Franks says.

The appeal to incoming students revolves around relationships and the environment only a tight-knit community can offer. “Our students have a one-on-one personal relationship with the staff. We are part of a small community with a strong academic reputation,” Franks says.

Head count isn’t the measure of Averett’s growth. The university developed a deliberate plan to fuel momentum. “We’ve launched seven academic programs in the last eight years,” Franks says. Early this year, Averett introduced the ‘Campaign for Main’ which is the first phase of a planned 10-year, $28 million campaign to raise funds to renovate existing residence halls and future expansions on its main campus. Renovations to the iconic Main Hall are projected to begin in summer of 2018. “We have to create more capacity to accommodate the growth. This isn’t only about where students sleep. It’s where they will live and learn. Students have been very involved in the changes,” Franks adds.

Averett is seeing more national endorsements and accolades. This year, the U.S. News and World Report ranked Averett as the 17th “Best Regional Liberal Arts College in the South.” “It was the university’s highest ranking to date, and it positioned us as the highest-ranking Virginia school among the 57-top tier schools in the category,” Franks says.

Averett was recognized as the seventh best regional college in the South for veterans and was the only Virginia school to rank among the “2018 Best Colleges for Veterans,” as well as the ninth “Best Value Regional College in the South.” In 2016, the university ranked 25th in the nation on bestcolleges.com’s “America’s Most Military-Friendly Colleges” list. “We have a long history of being friendly to our military. Averett has a veteran’s lounge. Our staff works one-on-one with veterans to help them adjust to college life. We like to put our arms around men and women of the military and say, ‘Thank you.’”

For the fourth consecutive year, the Princeton Review ranked Averett as one of the “best in the Southeast” in its Best Colleges: Region by Region guide. Colleges of Distinction has once again named Averett a 2016-2017 College of Distinction. “Averett was chosen for its ‘continued commitment to the Four Distinctions: Engaged Students, Great Teaching, Vibrant Community, and Successful Outcomes,’” Franks adds.

Giving Back to the Community

One of the many reasons for the university’s continued momentum is its deep roots in the community. “Community service is woven into the DNA of Averett, and many of our students, faculty, and staff have a hand in making a lasting impact in the region through their service,” Franks says. Each year, Averett participates in a “Week to Engage,” which is an annual week committed to serving the surrounding community through volunteerism.

Averett’s Center for Community Engagement and Career Competitiveness (CCECC) connects students, faculty, and staff from Averett, Danville Community College, and Piedmont Community College to offer volunteer services to community partners in the Dan River Region. “While the numbers aren’t in yet for this year’s Week to Engage, in September 2016, the CCECC coordinated more than 1,150 hours of volunteer service with 27 community partners during the annual week of volunteerism,” Franks adds. At Averett, learning goes beyond what is written in a textbook or taught during a lecture. “We have service-learning courses that allow students to take what is being offered in the classroom and apply those theories, principles, and concepts to real situations in the community,” Franks says.

In 2008, the Averett Student-Athlete Advisory Committee (SAAC) participated in the USA South Athletic Conference’s “Pennies for a Purpose” Competition. The program encourages institutions to collect loose change which is later donated to the organization of its choosing. Averett earned the “Pennies for a Purpose” plaque for the second consecutive year after collecting a competition-record $4,396.21 last spring. As a whole, USA South Athletic Conference institutions collected a record $10,084.36 during last year’s campaign. “‘Pennies for a Purpose’ is all about the students. It’s their way of saying, ‘We want to do good and give back to the community.’ There’s a competitive edge as well. Our students want to win,” Franks says.

In 2004, USA South Athletic Conference SAAC introduced “Cans Across the Conference” which is a can-food drive/competition amongst the USA South institutions. Each college or university chooses where to donate its collected goods. In 2016, Averett was crowned Cans Across the Conference Champions. “Averett’s SAAC donated more than 14,000 items to win the competition for the second year in a row,” Franks says. SAAC athletes gathered items from Averett students, faculty, and staff to donate to God’s Storehouse in Danville. “The amount donated this year is the highest in school history.” Overall, the USA South Conference institutions collected over 50,000 items.

Averett recently introduced Growing Up Musically (GUM) which is a new music program that impacts early childhood education. The initiative, which was generously funded by benefactors and former Averett campaign co-chairs, Ben and Betty Davenport, began in January 2016 at local Head Start and Smart Beginning’s childcare facilities. “GUM introduces children to music in the early years. This exposure helps with brain development, better discipline, and better attendance in class,” Franks says. “The curriculum is taken from Averett’s music department to deliver unique benefits to existing early education providers’ curricula and to children. GUM also integrates service-learning for student-teachers in Averett’s education program. Student-teachers work as interns to deliver the 12-session GUM program at childcare facilities and to teach early childhood education (ECE) providers how to incorporate music and movement into their instruction.”

Investing in the Community

Another area of growth for Averett is its deep partnerships within the region and its communities. The university has worked closely with Danville to strengthen this bond. Averett was one of the first to invest in the city’s revitalization of the River District. “With a $5 million investment, Averett opened its health sciences building on Bridge Street, or ‘Riverview Campus.’ “Averett holds an event for all incoming students to the university in the River District within their first week of school, so they can connect with the city, learn more about what it is has to offer, and to inspire them to make Danville their home,” Franks says.

It’s through ongoing partnerships and involvement that Danville and Averett remain close. “Danville supports reciprocity with the university by serving on one another’s boards. A volunteer group of Averett students in the Love Danville Higher Education Council regularly meets with Danville City Council members to share things they would like to see in the city, to build relationships, and network,” Franks says. Parks and Recreation works together with Averett on volunteer projects and engagement events for the students and community.

The momentum Averett is enjoying didn’t just happen. It was earned, and the university continues to plan for a better university and better city. “We at Averett, as well as the leaders of Danville, like to say, ‘When Averett does well, Danville does well. And when Danville does well, Averett does well.’ This is a symbiotic relationship between the city and its hometown university, and the palpable benefits and renewed energy that can come from such a partnership are evident everywhere we turn,” Franks concludes.

How Do We Reach the Extraordinary?
Previous Post
DocuDave: Celebrating 15 Years of Learning