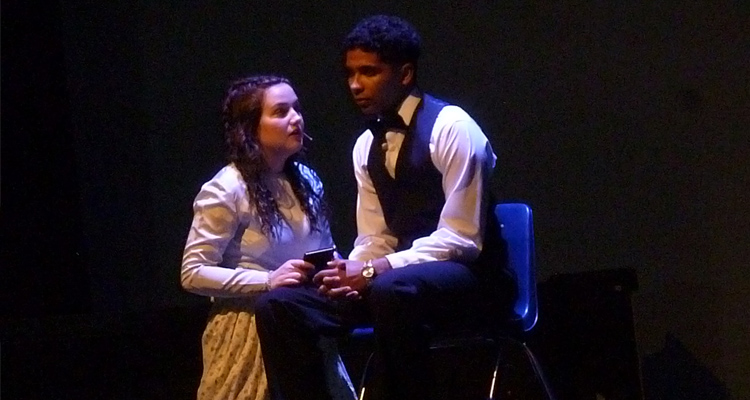 by showmag
Seldom ever will you find a more diverse group of kids working together and having more fun than those in a theater program.  When they work collectively to bring a production to life on stage, not only do they learn to dig deep and bring forth their best selves, they bring out the best in... Read More

Seldom ever will you find a more diverse group of kids working together and having more fun than those in a theater program.  When they work collectively to bring a production to life on stage, not only do they learn to dig deep and bring forth their best selves, they bring out the best in each other.  No longer do they conform to the social constructs of what are deemed appropriate relationships.  They don’t have hidden agendas, they don’t hate, they don’t fear and most of all they don’t doubt themselves.  If anyone is looking for the secret formula to raise a well rounded, courageous, confident, kind and motivated child, look no further than youth theater.

It’s sort of amazing to see the way kids band together over the course of doing a production from audition to stage.  It’s like water drops that are attracted to one another and will form a body of water that moves in harmony.  You might be the loud kid, the shy kid, the weird kid, the sassy kid; it doesn’t matter.  There is a role where you excel more than anyone else and your cast mates will encourage you all along the way.

Throw into the mix an awesome director who inspires them to greatness and the amount of self-esteem is likely to blow the top of your head off!  The adoration for directors of youth theater by their company is palpable.  A metaphoric stone cast in the director’s path will certainly cause the theater family to rally around like foot soldiers preparing for war.  It’s safe to say that acceptance is the norm, however just like anything else there can be a healthy dose of conflict.  We are human, conflict will happen and saying that theater kids can get overly dramatic about it is an understatement.  One thing is for certain, you cannot run away from conflict in the theater.  Everyone has to work out their differences in order to have a successful outcome on stage.

The benefits kids in theater programs reap are virtually endless.  You only need to go online and do a search to see they touch every aspect of life.  Empathy is learned in character development and carries over to create a kinder more understanding person.  Communicating, listening and thinking abilities are heightened and unhindered by attitudes and beliefs.  Team work, leadership and learning to navigate group dynamics are acquired skills.  The list goes on to include benefits in education, creativity, cultural awareness and public speaking to name a few.

So, now that you have been schooled in the boundless benefits of youth theater, what does that have to do with Danville?

Kids in Danville are experiencing a seesaw effect in the city.  On the one side, Danville is moving forward towards a positive future.  Economic growth is happening, even with a few hard knocks it seems to be steadily progressing.  Aesthetic improvements are happening, old buildings are being repurposed and there is an increased interest in Danville’s rich history.  On the other side, drugs and gang violence are unfortunate norms that have become an all too frequent disruptions in their lives.  Education seems to have taken a backseat to many kids who show no respect to anyone in school.  Those distractions can prevent students from learning and perceived inaction on the matter leaves them hopeless.  What they need is a shining beacon of light.  Recognition of their city in a positive way that each and every one of them can buy into.  Something that tells them they count, they are a part of the fabric of this amazing miracle.  That time has come.

The George Washington High School advanced theatre students have been invited to participate in the American High School Theatre Festival’s international competition which takes place during the Fringe Festival in Edinburgh, Scotland for two weeks during the summer of 2018. Only 60 high schools in North America were invited to compete.   For perspective, according to the National Education Center for Statistics’ last published totals from 2013, there are over 30,000 high schools in the US alone.  That means, even using the out of date US numbers we are among the 0.2% of schools who were invited!  Imagine the percentage when adding in the numbers from Canada and Mexico… it’s the miracle the kids have been looking for!

Okay, so now GWHS is “on the map.”  That won’t mean anything if the students don’t earn the money to get them there.  The trip is expensive at $7,000 per participant.  Insurmountable, right?  Not so.

Let’s think about it this way, it is taking the entire community coming together to move Danville forward to a positive future of engaged citizens and economic prosperity.  So why not include our students in that momentum and show them when their miracle is counting on you, you won’t let them down.  Right now in their economically depressed neighborhoods and uncertain futures they need a win.  None of these kids’ families could ever hope to come up with the money out of pocket.  Not to be a downer but even if these kids do fundraisers non-stop for the next six months they likely won’t earn the $7,000 needed.  That doesn’t mean they won’t be out there doing all they can to fundraise.  They are doing raffles, bake sales, etc.  They aren’t afraid of the time and energy it will take and will do everything they can to make it happen.  But let’s face it, in order to make this a reality they need the community.

When our sports teams make it into the championship games it isn’t just the players going, we all go!  We all feel the anticipation, exhilaration and hope.   We all feel the pride of their job well done.  So understand that this win isn’t just for those students who will board the plane to Scotland.  They take the pride of the entire community on their journey.  They have practiced and honed their craft and it’s obvious these students are good at what they do because they received the invitation.

Here’s how you can help.  First, join our Facebook page Eagles in Kilts.  As we do more to develop our momentum and lead the charge, you will see it there first.  We could sure use some help with our social media if any of you are experts.  Second, we will be doing community fundraisers and we need you to support them.  Not just for the money but to give our students encouragement and hope.  Also, if your group or civic organization would like to host a fundraising event please let us know via Facebook Messenger or by emailing Dana Tickle at dtickle1@mail.dps.k12.va.us.  Third, we need sponsorships from corporations in the Southside and beyond.

Most of all, we want to take all of you on this journey with us.  Oh, it would still be great for the students to go to Scotland, but to know you were there in spirit would incentivize them and their competition piece would show it.  Start that journey with us now and please like our Facebook page.  As we continue on this journey there will be more details to come about our actors and director.  Their stories are amazing and some will tug at your heartstrings, but they will all leave you inspired.

Thanks for your support, from the GWHS Eagles in Kilts.