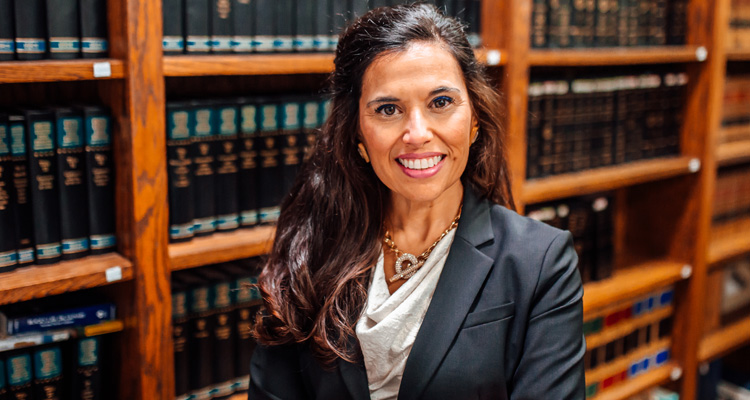 by showmag
It takes some people a while to find their direction in life, finding it in their mid-30s, while others get zapped right away, discovering their path a bit earlier.  Danville native and attorney with Clement Wheatley, Sandra Chinn-Gilstrap falls into the latter category.  “I declared at the young age of five years old that I... Read More

Does It Really Matter If We Don’t Brush Our Teeth?

I’ll Play Wherever They’ll Have Me

It takes some people a while to find their direction in life, finding it in their mid-30s, while others get zapped right away, discovering their path a bit earlier.

“I declared at the young age of five years old that I would become an attorney,” Chinn-Gilstrap said.

Her reasoning showed the maturity and leadership she would develop at an early age.

Chinn-Gilstrap’s half-brother was special needs, and she wanted to be the one that advocated for him.

“I wanted to be able to talk to the judge and ask if my special needs half-brother could come live with me rather than only coming for the weekends for summer vacations,” Chinn-Gilstrap said. “It was difficult to understand as a child. From that age and with that purpose, my goal was to become an attorney.”

For her efforts, Chinn-Gilstrap was recently named in the 27th Edition of The Best Lawyers in America in the practice area of family law.

“For me, as both a layman and an attorney, it is among the most honorable of recognitions,” Chinn-Gilstrap said.

Putting an extra bow on the award, it was the fifth consecutive year Gilstrap had earned the distinction.

“I was honored and humbled to read in print in print that I had been recognized in the 27th Edition of The Best Lawyers in America in the practice of family law, having been recognized since 2016,” Chinn-Gilstrap said.

For Chinn-Gilstrap, the honor speaks more to her fellow lawyers’ commitment to the Danville-Pittsylvania County community.

“It is a reflection of our shared philosophy and commitment,” Chinn-Gilstrap said. “I have been dedicated to my clients, the practice of law, and the community since 1995.”

“Further, throughout Southside Virginia, fortunately, value is still placed in lasting relationships —  often generational and that is certainly a treasure for me.”

Mental illness has always carried a stigma in the United States. People who suffer from depression, schizophrenia and anxiety, just to name a few, have often been looked down upon and separated from society.

However, Chinn-Gilstrap has been on the front lines, advocating for those with mental illnesses, enough to know the tides are changing.

“Mental health laws have transformed immensely since the 2007 Virginia Tech shooting and the 2013 tragedy suffered by our legislator Creigh Deeds, with his son’s suicide and attack on the legislator,” Chinn-Gilstrap. “As a society, Virginia recognized that it could no longer ignore the mentally ill.”

Her own personal experiences along with her dedication to others have made her a fierce advocator for those suffering and one of the best in the business.

It’s not always an easy line of work to be involved with, but her desire to serve others and advance the causes of those often overlooked, keeps her going.

“Are there tragic stories and cases? You bet,” Chinn-Gilstrap said. “However, the evolution of mental health treatment and the legal system together with faces, testimony and stories of so many genuine and innocent personalities and the scholarly, kind mental health physicians/professionals keep me engaged and endeared.”

“And it is my commitment to assisting this often marginalized and or forgotten population in society that keeps me going  —  a tribute to my special needs half-brother.”

While Chinn-Gilstrap has tirelessly dedicated herself to the Danville-Pittsylvania County region for the past quarter century, there was a time when she had her eyes set on a slightly different location.

From the time she was a teenager until midway through law school, Chinn-Gilstrap wanted to practice law in the international arena. Helping solve a problem most are familiar with.

“My plan during college and my first two years of law school was to practice law in South America,” she said. “The 90s were tragically unstable times in Colombia, South America. Medellin was considered one of the most dangerous cities in the world and the drug capital for Pablo Escobar’s cartel.”

During law school, Chinn-Gilstrap clerked as an intern at the Palace of Justice in Medellin while in law school.

However, her hometown ended up winning her heart, and she moved back in the mid-90s, beginning her practice.

“With the coaching of my deceased mentor, Lewis E. Red Goodman, Jr., the encouragement of Robert ‘Bobby’ Conner, former Halifax County Circuit Court Clerk and a summer internship in a Southside family law practice, I decided to come back to Southside Virginia and serve the people and businesses who make this area a rewarding place to live and raise a family,” Chinn-Gilstrap said.

She was honored in the 2017 edition of Best Lawyers in America, receiving Virginia recognition, and was further honored as one of the best lawyers in America in 2017 and was named the 2018 Roanoke lawyer of the year in family law. In 2017, Virginia Living listed her as one of the best women in law. She has also been named a 2017 super lawyer and 2016 super lawyer by Super Lawyers Magazine and a legal elite from 2013 – 15 by Virginia Business Magazine.

The secret behind her success?

“My father was a collegiate All-American athlete, coach, and educator who raised me to challenge my all-time personal best each day,” Chinn-Gilstrap recalled. “He made sure I worked as hard as I could and reminded me that determination was the success maker. My old-world mother believed that we were brought to the world with unique talents to serve the needs of others beyond family and friends. Mother’s energy was contagious.”

“From that combination, I have grown to awake each day with a commitment to serve and give my best.”