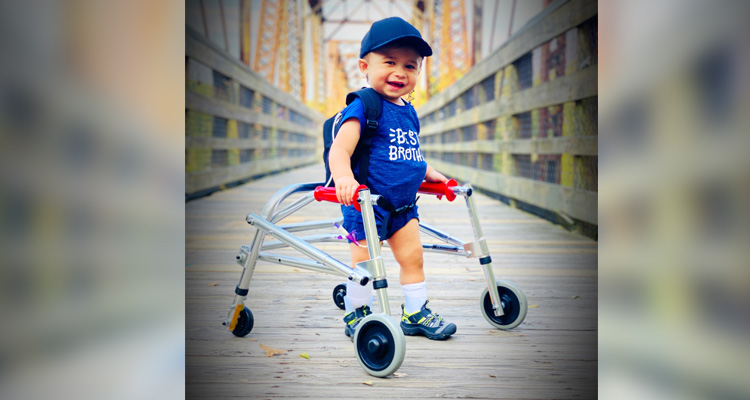 by showmag
Most parents will go their entire lives without receiving the devastating news their child has been diagnosed with a life-altering illness. Danville native Melissa Schnell isn’t in that category. Not by a long shot. The day her son Luis was born, Schnell received the news he had been diagnosed with a heart murmur. Local doctors... Read More

Most parents will go their entire lives without receiving the devastating news their child has been diagnosed with a life-altering illness.

Danville native Melissa Schnell isn’t in that category. Not by a long shot.

The day her son Luis was born, Schnell received the news he had been diagnosed with a heart murmur. Local doctors weren’t sure of the severity of Luis’s condition, but they were concerned enough that they sent him to Roanoke for further testing.

It didn’t take long for the pediatric cardiologists at Roanoke to diagnose Luis with Tetralogy of Fallot, a rare condition caused by a combination of four heart defects present at birth that affects fewer than 20,000 people a year.

“Ooh, how did we feel after learning how sick he was, that was hard,” Schnell. “We felt scared, angry, and very confused. As for me, I felt I was the blame for the longest time. I always felt it was my fault he was sick.”

While the original diagnosis would’ve been enough for any parent, more bad news would soon bombard Schnell.

It didn’t take long for the doctors and Schnell to notice Luis was also having trouble eating and was suffering from silent aspiration, a condition that caused him to breathe foreign objects into his airway because of problems swallowing or controlling his tongue.

Doctors inserted feeding tubes and ran tests to discover the problem, eventually diagnosing and treating Luis for severe acid reflux and silent aspiration. However, they quickly found the treatments to be ineffective and sent him for further testing.

“After a very long year of no true diagnoses and lots of different hospitals and doctor visits, we learned that his stomach is paralyzed, meaning that it takes weeks to empty, and they put him on medication for that,” Schnell recalled.

According to Schell, despite the diagnosis, Luis is still undergoing tests and treatments from doctors to correct the problem, well over a year later.

“In the near future we will go to Philadelphia for more tests to see what we can do next for him as the local hospitals (Duke, Roanoke, UVa., VCU) have all run out of options,” Schell said.

Schnell has found the diagnosis has turned her life upside down as she had to adjust to her newfound responsibilities with her son.

However, she looked into the faces of all the things she’d never done before and stepped up for her son.

“Adjusting to his condition and his needs was hard at first, but we knew we needed to do everything we could do to help him,” Schnell said. “I had to learn so many new things over the past year that I never thought I’d be doing. Daily medication, his feeding tube, oxygen.”

However, none of that has compared to the helplessness she’s felt watching Luis battle with his illnesses.

“The hardest parts were watching him go through so many painful things and not being able to do anything to help him because we knew he needed this to save his life,” Schell said.

Schnell’s maternal instincts have kicked into overdrive since his diagnosis, leaving her feeling guilty about time lost with her daughters Natalia and Lucia, five-and-seven-years-old, respectively.

“Being separate from my other children while he was staying inpatient for three months straight,” Schnell said. “Keeping my family away from the world because we can’t risk my son getting sick.”

Fortunately, Schnell had a nurse right by her side the whole time, who in her words “became like family,” but they recently had to let her go after she was diagnosed with the coronavirus.

The book of Proverbs contains one of the most powerful statements on motherhood and one that Schnell has been able to relate to over the past year.

“We have been there for him every step of the way, never leaving his side,” Schnell said. “From sleeping in an uncomfortable hospital chair next to his bed, to holding him through every vital check and blood draw. We are his safe place. He looks for us to be there by his side.”

It’s the wiser person who knows to look for the positive in the bad things life offers. All it takes for Schnell to change her outlook when her chips are down is taking one look at Luis, no matter if he’s having blood drawn, being stuck with needles, or enjoying being a child.

“Every day my son fights for his health, yet he still has the biggest smile,” Schnell said. “No matter what he goes through in life, he always comes out smiling. So watching him go through so much makes me appreciate what I have in this life.”

While Schnell has spent a significant amount of time wondering whether or not Luis’ illness was her fault, she’s coming to realize it’s not and that it’s better to stop questioning why he got sick.

It’s a piece of advice she wants to send out to other mothers or parents going through her struggle.

“The advice I would give to mothers going through this is foremost remember this is not your fault and you’re doing the best you can,” Schnell said. “Always remember to take time for yourself. Every day we manage situations that a “regular parent” thinks are impossible, but we have to encourage our children.”

She also wants parents to remember they are their child’s everything, and it’s that love that will push them through.

“You may not think so, but you are your children’s hero,” Schnell said. “We don’t jump for buildings or run faster than a speeding bullet, but we do things we’ve never imagined possible.”

Last, she wants parents to always cherish and value the time they get spend with their children.

“Even with this crazy life of daily therapy, doctors’ appointments, medications, don’t forget to enjoy your kids,” Schnell said. “Make memories outside of the hospitals and doctor’s office. Enjoy every little thing with your kid.”

I lied, there’s one more piece of wisdom she’d like to pass on to someone living in her shoes.

“Most important, forgive yourself,” Schnell said. “Yes, we will mess up, sometimes despite our best intentions, but no amount of beating yourself up will make you feel better nor will help you make better choices. Remember, we are all human and the toughest decisions have no right answers.”