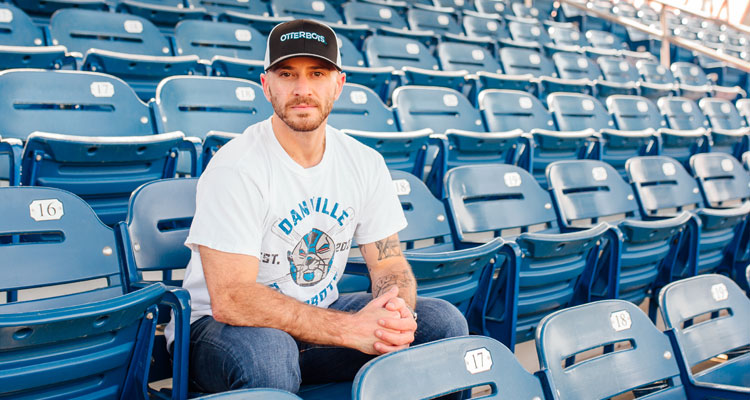 by Davin Wilson
By now, we all know — unless you’ve been living under a rock like the Cavemen from the Geico commercials — of the, well, Geico spots featuring the woodchucks chucking wood into a pond, and Ronnie from Ronnie’s Lumber telling them to stop. And of course, we can’t forget about the Ronnie’s Lumber sequel, where... Read More

By now, we all know — unless you’ve been living under a rock like the Cavemen from the Geico commercials — of the, well, Geico spots featuring the woodchucks chucking wood into a pond, and Ronnie from Ronnie’s Lumber telling them to stop.

And of course, we can’t forget about the Ronnie’s Lumber sequel, where Ronnie’s crew can’t finish filming a commercial because of the woodchucks chucking wood.

Danville Otterbots General Manager Austin Scher knows the now infamous spots and had a few opinions on whether otters could have out-acted the woodchucks.

“I would say yeah. I think honestly otters are underappreciated in their levels of adorableness. When you go to an aquarium or a zoo that has otters you might not be looking at a list of attractions and thinking the otter exhibit is at the top of the list but once you get there, you end up staring for an hour, because they’re just so cute,” Scher answered, after being asked if otters would have beat out the woodchucks.

He also had a few thoughts on the athletic capabilities of otters and woodchucks as well. When asked if otters could have chucked more wood than the woodchucks, Scher replied, “So, I’m going to answer this with a caveat, if you’re going with a normal woodchuck and a normal otter, I’d say a woodchuck has got an otter beat, but if you’re talking about an otterbot, then the otterbot would win because you’re taking an otter and making it better. More futuristic, more skills, more adaptive, so I would say a woodchuck beats an otter, but an otterbot beats a woodchuck.”

But Geico commercials and the acting and athletic abilities of woodchucks, otters, and even otterbots, aren’t the only pieces of popular culture Scher has in his wheelhouse.

Taking a trip to his Instagram page, it doesn’t take long to see Scher is quite the shoe connoisseur and his feed features a plethora of sneakers from Air Jordans to custom-designed Chuck Taylors.

“Yeah, it’s probably my biggest vice,” Scher said, laughing. “I don’t want to stay it’s a problem, but I often wear the same dress shirts and t-shirts and pants for a week at a time, clean of course, but with my shoes, I’ve got something different on every day.”

However, Scher’s specific focus on sneakers causes him a few problems now and then.

“But the issue is, I’ve only got one pair of dress shoes, so when I need to wear something nice, it’s the same pair over-and-over again. Even for the press conference to announce the Otterbots brand, I was wearing a complete suit with Air Jordan Concord 11s,” Scher recalled laughing.

After his great-grandfather immigrated from Italy to the United States, he settled into a small town right outside of Cleveland, Ohio, where he started a shoe repair shop. He passed it down to Scher’s grandfather, who continued operating the business as a shoe repair shop, but also transitioned it into a regular shoe store. To this day, his uncle runs the shop in its original location.

“I like to use the excuse the shoe obsession is in my blood, and I can’t help it,” Scher said laughing.

Like any true collector, he still remembers the first pair of shoes he ever bought on his own: A pair of silver Air Jordans.

“I loved them with all of my heart,” Scher said. “I had sneaker cleaner, paper towels, and old toothbrushes in my closet. Every time I wore the Jordans, I would sit down on my bed and clean them. I kept them looking brand new every day because I loved them with all my heart.”

One of the most iconic sneakers in history is the Air Jordan I. The shoe is widely credited as the catalyst for sneaker-culture, changed technology in basketball shoes and changed collecting forever.

The name or sight of them brings back a sense of nostalgia for those who grew up in the late-80s-90s and a chagrin from parents after being reminded how bratty some of their kids were over getting them.

When asked what his favorite shoes were, the Air Jordan brand was at the top of the list as he went back-and-forth between the classic Air Jordan I and Air Jordan 12 Wings.

“My favorite silhouette is the Air Jordan I, I have like nine pairs of those and they’re all different colors,” Scher said. “That’s the thing with them, you can have 100 pairs and none of them would be the same because they released so many color schemes. It’s a classic. It re-defined not only sneakers, but footwear.”

Any good shoe should be versatile, and it’s the Air Jordan I’s adaptability Scher loves and has needed, exemplified by his wearing the Jordan Concord 11s at the Otterbots’ press conference earlier this year.

“It’s a shoe you can wear in a formal setting if you dress it up the right way and you can wear them on the basketball court or the blacktop,” Scher said. “You can wear them to the gym, to work on a casual Friday, they’re so versatile. So I think that’s my favorite silhouette.”

In the end, though, it’s the Air Jordan 12 Wings Scher chose as his favorite pair because of the creative design.

“They are a black-and-white base but when you wear them, there is a heat activated gold that appears over the black portion so you can either take a warm rag and rub it on them and expose the wings artificially or as you wear them, the natural body heat your feet give, it will slowly start to appear. I think the design is incredible.”

Shoes aren’t the only part of Scher’s childhood he still carries with him.

“I did my birthday parties there, my Little League teams did their Field of Dreams night, my mom was a teacher and they would do their Teacher Appreciation Nights there, my dad’s company had nights out there, I grew up in that ballpark,” Scher said. “At the time, I didn’t think any more of it than this is awesome, this is fun.”

That all changed after Scher’s first year at the University of Wisconsin.

“One of my best friends from school interned one summer for the Madison Mallards of the Northwest League, and after that summer, he told me I should really look into working there and that I would enjoy it.”

Scher listened, but was forced into delaying starting an internship because of his need to finish a few classes in summer school. However, he went over to the Mallards’ ballpark his first free summer and got his feet wet, literally.

“I got my first job in baseball as a beer mover for the Mallards. My nametag literally said, ‘Austin S., Beer Mover,’” Scher recalled, laughing. “In a state like Wisconsin where people drink more beer than water, it was tough work, but I had the time of my life.”

At the end of his summer, as he was preparing to go back to school, Scher’s mother asked him what he thought about the job and he replied by telling her he loved it and baseball was what he was going to do the rest of his life.

Flash forward to 2021, and that’s exactly what Scher is doing, not only working in baseball, but readying to usher in a new age of baseball in Danville — something he’s thrilled to be doing.