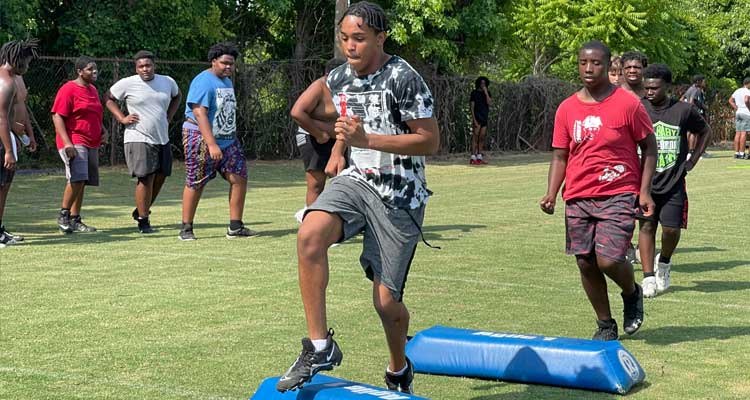 by Davin Wilson
The George Washington football team will begin its quest for a third consecutive appearance in the Region 4D championship game when it begins its 2022 campaign with a non-district matchup against Heritage on August 12 at 6 p.m. in Lynchburg. Here are five things you need to know about GW entering the season. Patience is... Read More

The George Washington football team will begin its quest for a third consecutive appearance in the Region 4D championship game when it begins its 2022 campaign with a non-district matchup against Heritage on August 12 at 6 p.m. in Lynchburg.

Here are five things you need to know about GW entering the season.

Patience is a virtue

Ninth-year head coach Nick Anderson went to an old adage when asked what message he wanted to deliver to GW fans entering the season.

“Be patient with us, just cheer us on,” Anderson said. “It’s a bit of a rebuilding year for us, but the kids are working extremely hard.”

However, GW has several players returning from last year’s squad that finished 9-2, won its fifth consecutive Piedmont District championship, and made its third consecutive appearance in the regional title game.

According to Anderson, his experienced returners are working hard not only on the field but also off, stepping into their new leadership roles.

“The kids are working extremely hard, we’re excited about where we’re at right now,” Anderson said. “We’re excited about how they’re progressing and taking on a lot of leadership roles as underclassmen. It’s good to see them mature and develop quicker because we need them to do that. They’re doing a great job.”

While the core of Anderson’s coaching staff returns this year, he will also have a few new faces.

Former Gretna coach Cole Simpson joins the Eagles’ staff where he will coach the tight ends and Jalen Chambers will also serve as a fresh face as the offensive line coach. After leading GW’s middle school program to success last season, Antoine Morris will serve as defensive line coach and the Eagles’ JV coach.

Anderson had not only great things to say about his new coaches’ game knowledge, but their energies and ages as well.

“Good coaches are good guys, bring a lot to the table, and are very energetic guys which I need because I’m getting old,” Anderson said, laughing.

GW has had a bit of a tradition over the last few years in having a successful quarterback calling the offensive shots. Sha’Kobe Hairston and Carlos Poole proved to be stellar shot callers in their respective stints on the team before Byrnes stepped in over the past two years and continued that success.

The Eagles lost Byrnes this year to graduation, but GW has a solid replacement in sophomore Nehemiah Cabell. Cabell was constantly seen shadowing Byrnes last season, talking with his captain to learn as much as he could. Expect to see his initiative pay off this season.

“He’s doing a great job, taking control of our offense,” Anderson said. “He’s a great leader and learning it a lot faster than we thought he was going to progress. We’re excited about how he’s developed in the offseason.”

Whether David Wilson, Kuashaun Forest, Willie Edmunds or Jakobe Dixon, GW has a tradition of productive running backs. While this year’s headlining name has yet to be established, Anderson commented on the plethora of talent he and his staff have seen in the backfield so far in camp.

“Running back is by committee right now,” Anderson said. “We’ve got a lot of talent in the backfield, a lot of guys who are coming along and understanding the offense. It’ll be interesting to see.”

Senior Razavier Carter saw limited action in the backfield last season, scoring a touchdown in the Eagles’ blowout of Orange County in the Region 4D quarterfinals. Anderson and staff have been impressed with Carter’s skill at linebacker and plan on using him there more right now.

Junior Darrell Mabin returns this year and has impressed Anderson and his staff. At 6-foot-1, Mabin stands taller than most running backs and can use his height and size to his advantage in seeing over the line.

Anderson also commented on the impression senior Omarion Hairston has made on the staff. Hairston returns from last year’s team where he starred at wide receiver, hauling in 25 catches for 524 yards and eight touchdowns, and linebacker. At 6-foot-2, Hairston will also provide some height for the Eagles in the backfield.

GW will be young on the defensive line with a sizeable chunk of its feared D-line from the past few seasons gone because of graduation. However, Anderson has been impressed by junior Quayenurion Conway, senior Elijah Bass, and senior Iuante Barksdale — all returners from last year’s squad.

The Eagles will be young on the offensive line with four-fifths of their returners from last year gone after graduating.

“New all around, that’s the motto for this year,” Anderson said. “Four new offensive linemen lost a lot of big names on the D-line last year. In the trenches it’s going to be a rebuilding year, but the guys we have penciled into the spots are working extremely hard, worked extremely hard in the weight room because they knew it was going to be their time this season. We’ve got a lot of new players in key roles. We’ll be moving kids around at the beginning of the year to figure out where the best pieces of the puzzle will fit.”