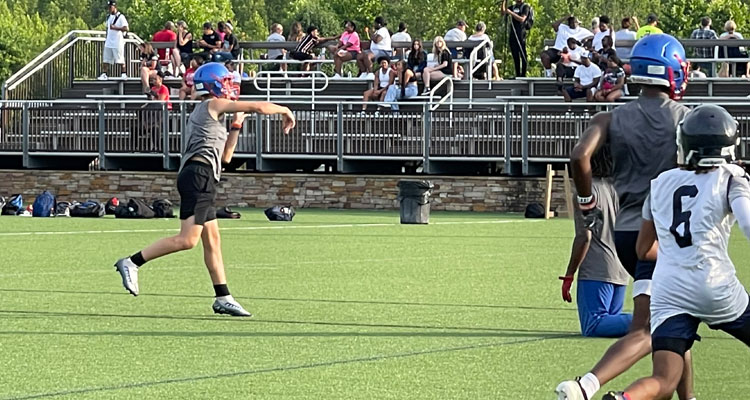 by Davin Wilson
The Wildcats will take the field under the leadership of fourth-year head coach Brian Womack. The ‘Cats have an overall 13-13 record, including a 10-5 mark in Dogwood District play, and two regional playoff appearances — including a spot in the 2020 Region 2C semifinal — under Womack’s tutelage. Here are five things you need... Read More

The Wildcats will take the field under the leadership of fourth-year head coach Brian Womack. The ‘Cats have an overall 13-13 record, including a 10-5 mark in Dogwood District play, and two regional playoff appearances — including a spot in the 2020 Region 2C semifinal — under Womack’s tutelage.

Here are five things you need to know heading into the season.

By the end of the weekend, he had an offer from the Cavaliers to play on either side of the ball.

The Cavaliers aren’t the only Division-I program showing interest, though, as James Madison, William & Mary, Elon, Virginia Tech, Georgetown, and Old Dominion have all expressed interest in Coleman.

Any interest Coleman has garnered shouldn’t come as a surprise, given he recorded team-highs in receptions (36), receiving yards (699) and receiving touchdowns (7). The 6’3” safety also recorded a team-high seven interceptions and recovered a fumble for Dan River.

After starting last season as a wide receiver, Coleman moved over to safety where he became proficient in reading the quarterback and picking up on zone coverages on his way to leading the state in interceptions.

Womack commented on how the Wildcats started last season with only five starters from the previous season on both sides of the ball. He also remarked on the high number of true freshmen the ‘Cats featured, and the number of kids who had never played JV football because of the COVID-19 pandemic.

Things will be a bit different this year as Dan River returns all but two starters from last year’s team.

The Wildcats will also get a huge shot in the arm from the return of Darvin Gregory who rushed for a team-high 660 yards and five touchdowns last season.

The ‘Cats’ receiving corps will also benefit from Coleman’s return along with senior Tilden Garland, who hauled in 12 catches for 250 yards and a pair of scores last year.

Senior Kasey Ferguson will anchor the defense after recording 95 tackles, five sacks, and four fumble recoveries last season. Senior Jakari Thomas is back after finishing his junior season with 55 tackles and a team-high six sacks. Senior D’Andre Thomas will look to play a big role defensively. Thomas finished second on the team last season in tackles with 72.

“We have more matured kids this season, last year nearly 75 percent of the team had never played high school football,” Womack said. “The COVID year only allowed our JV team to play one game, but we’re getting a lot more experience this year.”

Fast and Strong, the Message

The ‘Cats have experienced quite a bit of success over the past 14 years, posting an overall record of 88-58 and a district mark of 46-24 while qualifying for the playoffs 10 years in a row, including the 2011 Class 2 state quarterfinals.

The Wildcats didn’t experience the same success last year, finishing 3-7 (3-3 Dogwood) and missing the playoffs for the first time since 2008. It was lack of experience, not lack of talent, that led Dan River to that mark.

That won’t be a problem for the ‘Cats this year as they not only return an experienced team, but according to Womack, one of the strongest and fastest in recent years.

Every preseason camp needs a theme and Dan River’s camp isn’t any different as Womack zeroed in on his team’s focus so far.

“Through this off-season we have developed more discipline and have bonded as a team with one goal, win,” Womack said.