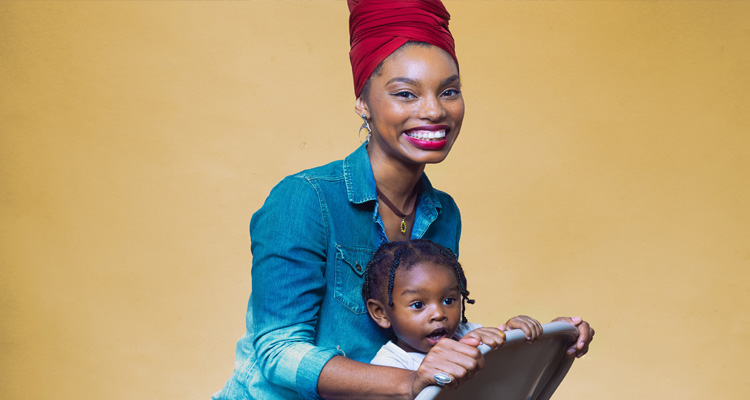 by Anna Brooks
Showcase Magazine sat down with Shay Ayala, founder of Solflower LLC located in Danville, VA, and her partner, Jameel Rashad Austin, at local coffee and wine bar, Crema and Vine—this location significant—as it’s where the two first began their relationship and where Ayala was inspired to redirect the mission of her organization, Solflower. Accompanying them... Read More

Showcase Magazine sat down with Shay Ayala, founder of Solflower LLC located in Danville, VA, and her partner, Jameel Rashad Austin, at local coffee and wine bar, Crema and Vine—this location significant—as it’s where the two first began their relationship and where Ayala was inspired to redirect the mission of her organization, Solflower. Accompanying them was their 18-month-old son, Phoenix, who they claim turned the world “right side up,” born in March 2020, when the pandemic turned the rest of the world upside down.

Ayala founded “Solflower” in May 2018. The name, a compilation of the Spanish word “sol,” meaning “sun,” and “flower,” is reminiscent of “sunflower.” Ayala recalls the sunflowers, sometimes 12 feet tall, her grandmother cultivated in their front yard; this was a large influence in naming her organization “Solflower.” “Sol” also plays on the word “soul,” as Ayala encourages her clients to let their “so(u)l flow.”

Originally, Ayala imagined Solflower as a clothing boutique; however, she was inspired during an open mic night to continue with the LLC to provide the community with her expertise and passions, including doula services and training, breastfeeding support and advocacy, and natal chart preparation and tarot card reading upon request.

“It hit me during the open mic, as I experienced the poetry and the sense of community, that I wanted to move forward with Solflower as something other than a clothing boutique—it’s a means to empower women. Solflower is [in essence] me.”

Solflower’s mantra is Alexander Den Heijer’s quote, “When a flower doesn’t bloom, you fix the environment in which it grows, not the flower.” With empowerment at the front-line of Solflower, Ayala claims the latter quote as the organization’s mission statement.

“When people see a problem, they want to change the people involved rather than the circumstance, but I believe sometimes it’s the situation that needs to be fixed and not the people—often, the system is what’s broken.”

Ayala is still awestruck by the way her doula training found her. For many, a doula, pronounced “doo-luh,” is often confused with a midwife. A doula’s role during birth is not to deliver a child but to provide coaching for a mother and her partner pre, present, and post-birth. Ayala was always familiar with a number of doulas. Her favorite musician from the age of five, Erykah Badu, is a doula. “I would definitely say that I am a child of hers,” says Ayala, expressing her love for Badu’s “neo-soul” compositions.

It wasn’t until Ayala realized, family-friend, I’man Boykin, owner of Sacred Beginnings, was a holistic doula that she felt confident to fulfill her calling to become a doula as well. “I had never known a doula personally. Realizing that I’man was a doula made becoming a doula more real for me,” states Ayala.

The birthing process is sacred to Ayala. Growing up, she served as a support for her mother during the birth of all her siblings. “I supported my mother during all my siblings’ births without any training. I’m comfortable with birth. My mother has always told me I was a doula before formally becoming a doula.” Ayala works to preserve her child-like intuition in all of her practices, allowing herself to veer away from “the rules” of a practice. Following intuition and responding to her clients’ energies allows her to mold a subjective experience for individual clients.

Ayala’s formal training concluded in May of this year. Since then, she has provided doula services through Solflower during a virtual birth. Recently, she connected with her first in-person client during a home visit. As a doula, Ayala intercedes as encourager and caretaker for the mother. This includes making sure the mother is feeding her body, taking her pre-natal vitamins, and preparing her and her partner for birth. Ayala works to coach mothers and their partners in order to strengthen their relationship prior to birth. If a mother doesn’t have a partner, Ayala steps into that supportive role. Ayala is as present as a mother or couple needs her to be before and during a birth.

Ayala will work with any mother in need of a doula, yet her work is driven by a need to end fatal births in mothers of color. “I don’t know if you know this,” Ayala shifts in her chair to accommodate her son, Phoenix, as she breastfeeds him, “but Black women are four times more likely to die during child-birth. I want to contribute to closing that gap.” Being a doula is not seasonal, but rather, it’s a role Ayala sees herself in for the rest of her life. Ayala hopes to make doula training and services more accessible in Danville through Solflower. Inquiries regarding doula services can be directed to info@thesolflower.com.

Ayala recently began working with the VDH as an outreach worker and breastfeeding peer counselor. “That’s my day-job,” Ayala affirms. However, this role carries over to Solflower, as Ayala hopes to help mothers in our community “get back to their roots” by rediscovering the sacredness of breastfeeding. “As women, breastfeeding is something we were designed to do. Yet so many new mother’s first response is to reach for formula as a source of nourishment for their baby,” states Ayala. As a breastfeeding peer counselor and doula, Ayala wants to present breastfeeding to her clients as an option that is accessible, affordable, and beneficial for both the mother and her child. Ayala hopes to normalize breastfeeding for women in our area and make it a mother’s instinct to allow her body to provide for her child.

As part of her mission, Ayala has written a number of blogs which serve as a resource and support for mothers. “Writing how I feel and then seeing comments from other mothers, like ‘This makes me feel so seen,’ is very healing [for me].”

It’s the interpretive nature of art-forms, like writing, that Ayala and Austin feel makes it the best means for communicating emotion or experience. Austin, Ayala’s partner, interjects, “I think that’s the beauty of art—right? You get to remove your filter and express yourself in a way that is, often, more receptive.”

In speaking to skepticism surrounding astrology, Ayala states, “I don’t think we realize what we’re made of. The moon affects the ocean tides—we are made of about 60% water. [The moon and other planets] have to affect the ethereal parts of ourselves. Humans are fluid, and I like to explore that side of our experience.”