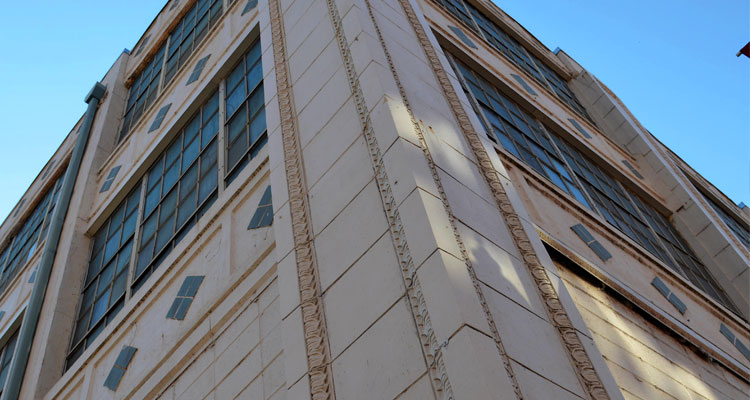 by Barry Koplen
City Notes is a multi-issue series about revitalization in the area told through the words of Barry Koplen. Would history repeat itself? That thought hadn’t occurred to me until David, a construction supervisor friend of mine, told me to look at the gray building across Craghead Street and down the street from the one his... Read More

City Notes is a multi-issue series about revitalization in the area told through the words of Barry Koplen.

Would history repeat itself? That thought hadn’t occurred to me until David, a construction supervisor friend of mine, told me to look at the gray building across Craghead Street and down the street from the one his team had almost finished restoring. “The one with diamonds on it,” he said.

Raised concrete diamonds, painted a medium jade green, stood out in rows below, in between, and above the second and third floors; they ran the length of the front of the imposing building. Although it was empty, the building stood out as if it were a celebrity. The back lot of the building touched the sidewalk at the top of the hill on the street parallel to Craghead.

“That was Crowell Motors,” said David; the name had been unchanged for about four generations. “The first-generation owner was friends with Henry Ford. Fords were shipped to the building and were finished there,” he said, before telling me that Ford and Crowell owned all the dealerships between Virginia and Florida.

“There was a ramp in the back where they would drive them into the building on the top floor,” he added. “Then a huge lift would bring them down to the first floor.”

Although I’d often walked past the front or the back of the building, I never looked for cars there.

While it was in its heyday, either I wasn’t in the market or I was more interested in Main Street movie theaters or my part-time job as a teenager at my Dad’s store, Abe Koplen Clothing, on North Union.

But, as I walked past the Crowell building this morning, I had no trouble imagining a dealership returning to the building just to be on Craghead.

That reminded me of the magnetic draw of the revitalized downtown. People wanted to see history come alive. And just a few blocks from the Crowell building, it was.

As I climbed to the second floor, the top floor, of one of the Dudley buildings, I was surprised to see that the studs were in place for the apartments there. What attracted my attention was the solid construction; rather than 2 X 4’s I’d seen in some other buildings, those walls were crafted of 2 X 6’s and 2 X 8’s. Wiring, windows, and plumbing would soon follow.

As the carpenters and I walked into the next building via an original brick archway, I entered the area where they would construct their next walls. When I asked a question about supporting the ceiling’s exposed rafters, the chief carpenter told me to follow him through a similar brick archway at the other end of the hall.

On a makeshift table sat the blueprints. He pointed to the wall he would build in the next few days. That wall would support the beam that ran the width of the part of the building we’d just left. Everything had started to make sense.

At least to me.

“Who’s going to live here?” asked the carpenter. “I’ve wondered about that,” he said.

I assured him that, in a year’s time, he would see that lots of people would move downtown. “Next month, the Research building will open. That will bring hundreds of people down here. Many will want to live down here,” I said.

Then I pointed to my next stop, the building with the turret a block away.

“There will be a brewery there with a huge tasting room with a restaurant big enough to be rented as a banquet facility for special occasions,” I said. He liked that.

But I didn’t tell him that, just before entering the brewery complex, there would be a spa. “Apartments will be on the two floors above that,” I said.

Thanking them for the time they’d spent with me, I climbed down the stairs, left the building, and turned right. In less than three minutes, I was at the brewery I’d just talked about. Operating a lift outside, the man behind the controls said hello. Three stories above us, his lift was delivering a load of twelve-foot-long lumber. He waited as it was being unloaded, one board at a time.

We started talking about his roots in South Carolina, about his dad, a career soldier who got out after twenty-seven years. Eventually, his father opened a few bars in Chapel Hill. Our conversation veered to a discussion of the Civil Rights Era and the changes he’d seen. I mentioned my book, No Gold Stars, based on my memoir about integrating Rev. Jesse Jackson’s alma mater in Greenville, South Carolina..

His smile told me he recognized my story about that book.

As I studied his royal blue jacket and baseball cap, I struggled to recognize him.

Until he asked whether I wanted some barbecue.

“I brought some today,” he said. Instantly, I remembered Nick, a short and stocky man with a heart of gold. “Come back around noon,” he said.

Checking time, I saw that would be in a few hours.

I didn’t make it. In fact, I was two hours late when I returned with a signed copy of No Gold Stars for Nick.

But I couldn’t find him. “Upstairs,” someone told me. I hurried to the top floor. To my surprise, I saw that most of the apartments were ready for painting and for installing doors. Molding was being installed; floors would be sanded soon.

I made a note to return tomorrow as I left for the second floor. It was only three to four weeks behind the third. “Have you seen Nick?” I asked.

No one had, so I climbed down to the first floor and headed for the front door. That’s when, to my right, I caught a glimpse of Nick’s blue jacket.

He waited for me. Then I handed him my book.

“Is it autographed?” he asked.

“Let’s get you some barbecue,” he insisted.

Just as I was about to tell him that wasn’t why I was there, he asked if I wanted coleslaw and beans. He’d already scooped the barbecue.

Others gathered round. Nick insisted they have some, too. Nick was surrounded, too busy for me to tell him that his barbecue was even better this time than the last.

If I’d been able to, I might have added that being there with him and the other guys was the closest I’d come to a family picnic in a very long time. I wanted to thank him for remembering me, for making me feel that I’d be welcomed the next time I came to take pictures at 600 Craghead.

A Healthy and Happy New Year
Previous Post
Is It Real?