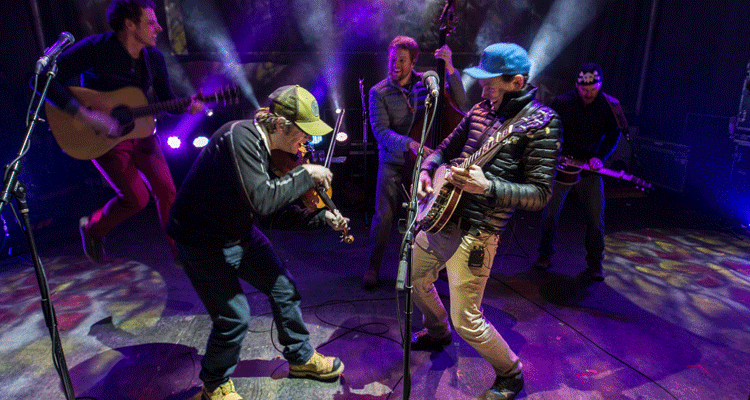 This year’s crowds for Rooster Walk 6, scheduled for May 22-25, are expected to exceed 4,000 thanks to acts like Karl Denson’s Tiny Universe, the Infamous Stringdusters, Tim O’Brien and Darrell Scott, Anders Osborne, the Pimps of Joytime, Particle and Yarn, just to name a few. The festival takes place just north of Martinsville, Virginia at Blue Mountain Festival Grounds, located just off U.S. 220 in the heart of the Piedmont foothills.

“We’re really proud of this year’s band lineup,” says co-founder and organizer Johnny Buck. “Most of the headliners are playing two-hour sets. We’ve sold out of VIP tickets for the first time. Rooster Walk 6 is going to be an amazing little music festival.”

Blue Ridge Outdoors wrote, “If you find huge crowds to be a drag, consider this low-key weekend that features an impressive lineup of roots music held in the scenic foothills of Martinsville—a former furniture mecca making a comeback through arts and outdoor recreation.”

Other acts Buck and William Baptist, co-founder of Rooster Walk, have put together for RW6 include the Lee Boys, Stephane Wrembel & His Band, James Justin & Co., the Kings of Belmont, Sanctum Sully, After Jack, the Jon Stickley Trio, Hotel de Ville, Urth, Mason Via & Friends, and many more.

Jay Franck, who plays mandolin and co-founded the Asheville, North Carolina band Sanctum Sully stated his band, which played the first Roster Walk, has grown with the festival. “For me, a large part of Rooster Walk is that it’s a homecoming,” said Franck, who is a 2001 Martinsville High graduate. “I enjoy the smaller festivals because you don’t have to miss anything, and you don’t have to walk forever to see music or play. It’s an easier experience. I feel like the crowd is similar that goes to Rooster Walk and FloydFest.”

The family-friendly Rooster Walk, which features on-site camping, the Tuff Strutter 5K trail race, food vendors, music workshops, and kids’ activities, is like a backyard cookout with your friends and a soundtrack of great music.

“There is so much more,” Selma Smith of Averett University in Danville wrote on Facebook. “Every aspect of Rooster Walk is so well run. Those who have not been should go. You’ll be glad you did!”

Rooster Walk was started to celebrate the lives of two close friends who died too young — Martinsville natives Edwin “The Rooster” Penn and Walker Shank. “Ever since elementary school, we were a tight knight group,” Buck said of his and Baptist’s friendship with Penn and Shank. “When we lost Edwin and Walker, we wanted to do something in their memory that they would’ve loved. Something that brings people together for a good cause and something that can serve as showcase for the Martinsville area.” A portion of the festival’s proceeds goes to a scholarship fund for Martinsville High School seniors. More than $30,000 has been donated to the Penn Shank Memorial Scholarship Fund since 2009.

With each year Rooster Walk grows in popularity. Rooster Walk 6 is sure to be the biggest yet. “We just want to keep this thing rolling,” said Baptist. “Make it better every year, remember our friends with the scholarships, and show off this part of the state to visitors who might want to come back again sometime.”