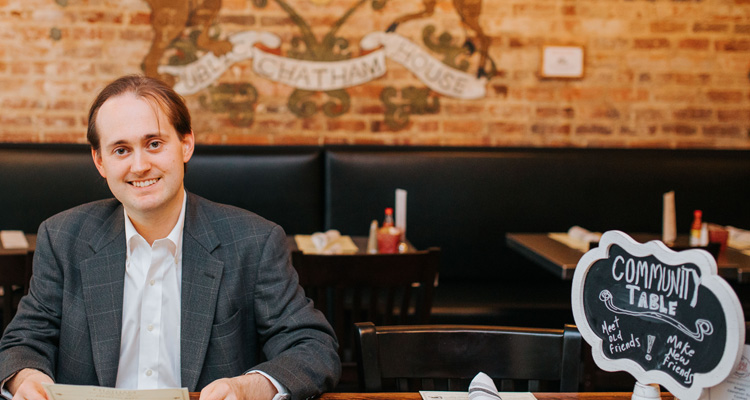 A Vision For Chatham

by showmag
Community. It has been described as a feeling of fellowship with others, as a result of sharing common attitudes, interests, and goals. Chatham Town Councilman Will Pace said that a strong sense of community is one of the things he loves most about the town he now calls home. Born and raised in Richmond, Virginia,... Read More

Dragons Are Coming: The Dragon Festival at VMNH

Early Detection is the Best Protection

Community. It has been described as a feeling of fellowship with others, as a result of sharing common attitudes, interests, and goals. Chatham Town Councilman Will Pace said that a strong sense of community is one of the things he loves most about the town he now calls home.

Born and raised in Richmond, Virginia, Pace graduated from Hampden-Sydney College in 2010 with a double major in government and economics, with a minor in public service. “I have lived in Chatham on and off for the past seven years, ‘full-time’ for the past three years,” says Pace. “During the four prior years, I lived in Chatham for at least one week each month while working for former Congressman Robert Hurt. The rest of each month, I lived in Arlington.”

Politics and public service are clearly in Pace’s blood. Along with his government major, and time spent working for Congressman Hurt, he has continued to be involved in the Virginia political field. He is currently the legislative aide for Delegate Charles Poindexter, a job he really enjoys.  “I assist with all aspects of his legislative duties, both in the House District that he represents (Franklin, Henry and Patrick Counties) and in Richmond when we are in session during the winter,” Pace remarks.

Today, Pace not only calls Chatham home, he is actively involved in shaping its future. He was elected to the Chatham Town Council in 2016.  Prior to that, Pace was the chairman of the Chatham Planning Commission and helped update the town’s comprehensive five-year plan.  He is also a member of Chatham First, a community organization that works to improve the quality of life in Chatham. Some of the projects that Chatham First has been involved include improvements to the Frances Hallam Hurt Park, Competition Alley, Silas Moore Park, and the Edmund Giles Gateway Park. “I am very proud of the work that Chatham First does in the community,” Pace notes.

It’s been said that people are what make a place. For Pace, that is certainly true of Chatham. “Since the day I arrived, I have felt so welcome living in Chatham,” he says. “Without exception, whether you are visiting for the day or you have lived in Chatham your entire life, everyone makes you feel welcome and appreciated.”

The future looks bright for Chatham as Pace sees more progress on the way.  “Chatham and the surrounding community have been identified as emerging artistic, cultural, and food destinations with places such as Reid Street Gallery, Simpson Funeral Home Museum, Chatham Public House and many more,” he states. “Over the coming months, I think you will see several exciting development announcements that will make Chatham a very attractive destination for families and young professionals. I am very excited about Chatham’s future.”