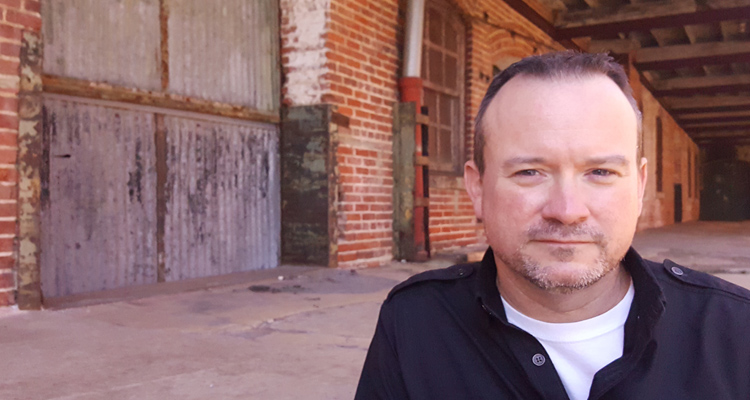 by showmag
In 1984, popular music spanned many genres. Tina Turner and Madonna ruled the pop airwaves. With perfection, Prince blended R&B and rock with “When Doves Cry” and “Let’s Go Crazy.” And thanks to MTV, RATT (with the help of Milton Berle) ushered in the beginning of hair metal with “Round and Round.” Countless teenagers watched... Read More
Who Are All These Men?

In 1984, popular music spanned many genres. Tina Turner and Madonna ruled the pop airwaves. With perfection, Prince blended R&B and rock with “When Doves Cry” and “Let’s Go Crazy.” And thanks to MTV, RATT (with the help of Milton Berle) ushered in the beginning of hair metal with “Round and Round.” Countless teenagers watched the videos dreaming of a career in music. For many of those who followed their dreams, music brought happiness.

Danville-native, Mark Davidson was 13, and three things drew him to music, “girls, MTV, and the desire to be cool.” He knew he wanted to learn to play. “My dad took me to the Ringgold Flea Market. We purchased my first guitar, amp, and a book on how to play. To this day, it was the worst guitar I have ever owned, but it made me so happy,” Davidson says. He had no formal training and wasn’t in the school band. “I taught myself to ‘play by ear’ learning from watching other musicians.” Soon after getting a feel for the guitar, he joined a few garage bands. It began a lifelong love of playing music for Davidson. “I can’t imagine a life outside of being a musician. I will be playing until my fingers won’t let me play anymore.” He started out as a guitar player, but today Davidson considers himself a singer and song writer. “My love is the guitar, but I also play the banjo, bass, and piano. I perform, record, and produce all of my own music.”

Through the span of his career, Davidson has tackled many genres of music. He cites Lynyrd Skynyrd, Journey, Skid Row, Alice N’ Chains, and Eddie Van Halen as major influences. “Van Halen’s 5150 is one of my favorite records. Eddie’s guitar work and solos are tremendous,” Davidson says. Lynyrd Skynyrd’s Gimmie Back My Bullets is another favorite. “There were three guitar players. You can’t be a guitar lover and not like this album.”

Davidson got a taste of the live experience at age 16 after joining the band Borderline which played primarily country and southern rock. “My first show was at the Festival in the Park in Danville. Most of the musicians were over 30-years old.” Even though he was much younger, Davidson didn’t have any problem keeping up with their playing experience. His age did pose one problem. “Because I was still in high school, they had to sneak me into bars and clubs to play,” Davison adds.

Two years later, Davidson began to evolve as a musician and started writing original songs. When he was 21, Davidson joined Mister Meanor, a hard rock/heavy metal band. “I was really able to show off my guitar skills playing with Mister Meanor.” Not long after Nirvana changed the landscape of heavy music with “Smells like Teen Spirit” grunge became popular. “In 1994, I started playing with No Excuses, an alternative/grunge band. This is when I began experimenting with recording music,” Davidson says.

In 2000, Davidson joined the Pizazz Band. “I’m fortunate enough to say I am still with them today. Pizazz is a band for everyone. We play music from every genre. It is not just about the music, we are performers.” When he joined the band, Davidson came out from behind the guitar to sing more songs. “The music we play is intended to get people out of their seats and on the floor to dance. If you’re tired of dancing, you are sure to enjoy watching the show,” Davidson adds.

These days, Davidson records and produces his own music along with some other local artists. His latest single “Is It Love?” is available on iTunes, Amazon, and Spotify. Davidson has other songs to listen to on ReverbNation. (Search markdavidson8). He stays busy playing local gigs at The Warehouse, Frank’s, Buffalo Wild Wings, Kickback Jack’s, and the Main Street Cafe in South Boston. To catch Davidson with the Pizazz Band check out  the Pizazz Band.

For anyone aspiring to get into the music business, Davidson says, “Don’t give up when it’s tough. It may sound a bit cliché, but it is true. I’m living proof you can make a career playing music. You don’t have to be famous have a career in music. Many people dream of becoming famous. For me, it was never about becoming famous. I love performing and making music. I’m fortunate enough to make a living doing what I love.”