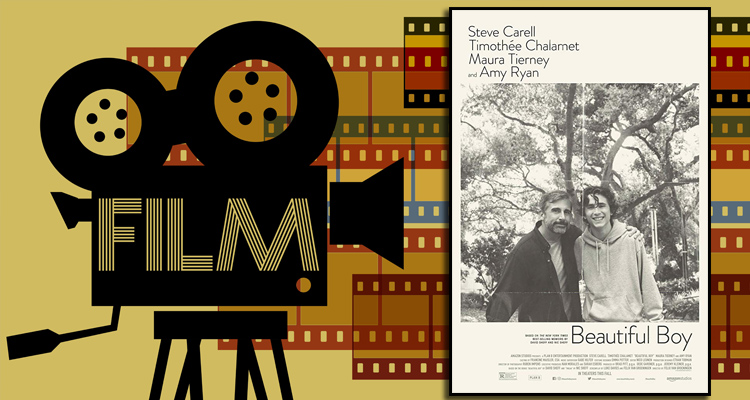 See it if you enjoy: Drama, Biographies, Addiction, Oscar Movies, Cultural Issues.
Manchester by the Sea, One Flew Over the Cuckoo’s Nest, Dallas Buyers Club.

Based on the memoirs of a real father and son David and Nic Sheff, Beautiful Boy requires stellar performances by the two main actors as well as the supporting cast and it delivers just that. There are moments in this movie where I felt like I was watching Steve Carell with his son, which is obviously the point, but many times actors miss the mark. Being a father myself, there are subtle moments that stand out. The way a parent looks at their child, these tiny moments they themselves will almost never be aware of. The way a parent must put on a show for their children appearing strong and in control of a situation only to be followed by brokenness the moment they are not watching. Even from the opening scene, it is clear Carell is doing some of his best work here portraying David Sheff, a caring father doing everything he can to raise his son to be a healthy, content, and successful young man. It is one thing to deliver a line, but the real acting takes place in the silence. The camera stays on Carell for the opening scene, allowing us to see the defeat in Sheff’s eyes, leaving us wondering how this man got here. Timothée Chalamet accompanies Carell’s solid performance with an Oscar worthy showing of his own. He portrays Nic Sheff in a way that is beyond believable. The struggle of his addiction becomes a part of us and we struggle right along with him. The icing on the cake is the supporting cast. Many times, a film of this nature will get the leads completely right but ignore the necessity of a strong supporting cast. Even the child actors in this movie bring a realism to the story that makes us aware of all the impacts addiction has on everyone connected to a person. We see not only the effect on Nic and his Father, but we see the pain it causes his mother, step-mother, and siblings. What this movie does best is educate. Requiem for a Dream is one of the first movies that made me feel the hopelessness of addiction, but there was still some amount entertainment in the stylistic approach of that film. Beautiful Boy keeps the tricks to a minimum. There was never a time I felt like I was being forced into an emotion. There were never moments the story felt tweaked by Hollywood writers. It all felt very real and very sad. You become a part of this family and join in the repeated defeat that comes with addiction. There are moments in this film that you are rooting for Nic to make the right choices and you join in the defeat, the regret, and the shame. There are moments you relate to the father and are left to question Nic’s possible relapses. The way the movie at times never actually answers those questions directly or drags a scene out with hope really puts the addiction into perspective. The cinematography, writing, and score all accompany this movie’s acting and enhance it. At times the score feels odd, perhaps too uplifting during a tragic scene or vice versa, but it is clear this is purposeful, and it works well. You understand on one level how damaging these drugs are to Nic and yet you also understand how in the moment he needs them and enjoys them disregarding logic. Overall, this movie accomplishes what it sets out to do, to educate the world on the devastating and often overlooked reality of addiction.

It is difficult to find the bad in this movie. Perhaps if you are going to the cinema for the sole purpose of entertainment or to escape from the real world, this movie is not for you. It is real and visceral and painful. It does not hold back any punches. The only other minor issue I had was some of the nonlinear storytelling. There are scenes that take a minute to adjust to, realizing where you are on the timeline and that felt a little distracting. Overall, it was done well, and the flashbacks were laced into the father’s perspective in a way that works. There is a consistent visual of the then and now, the question of, “How did my son get here?” This works for most of the film, but I did find myself briefly confused at times. Perhaps this was due to the fact that Nic was portrayed by four different actors by my count. I understand there is a big difference between a six-year-old and an eight-year-old, but I feel the variety of actors distracted me at times.

The Ugly:
[spoiler title=”Spoilers! If You Have Not Seen the Movie Stop Here!”]Beautiful Boy is not an easy watch. There are plenty of shots of needles going into arms, vomiting, and other unpleasant moments that accompany drug use. The more difficult thing to watch is the way addiction repeatedly beats a person’s soul into the ground. This is not a happy ending movie in the general sense. It is a roller coaster that you become a part of and the highs are far outnumbered by the lows. You see parts of a young man’s life fall apart and while he may heal from it to an extent, there are years taken from his life that will haunt him forever. You see an otherwise successful and happy father broken down. The scene where he snorts what I assume is cocaine to feel some understanding of his son is such a good representation of how far a parent will go for their child. Later in the film, we see David appear to give up on his son. He turns Nic away when he calls begging to come home. Carell’s expression or lack thereof is painful to watch. You are almost shocked at his sudden change of hope. The entire movie has been about David never giving up on his son and yet now he has drawn a line. It is not until he hangs up you realize he has simply run out of ways to help Nic and knows turning him away may be his only option. There is so much happening in this scene. Prior to this conversation David’s wife tells him he cannot help Nic and we see David repeat this to his son on the phone as if he has accepted that fact. His emotionless face immediately erupts into pain and sadness when he hangs up and the helplessness is evident. It is a difficult scene to watch as a parent. David’s wife played by Maura Tierney is by no means an outsider to Nic’s life as the step parent is many times portrayed. I loved that we got to see a glimpse of her history with Nic. You can see she loves him as her own and later see the pain she is going through as well. There is a scene where she gets in the family minivan to chase Nic and you feel like she is going to catch up to him and somehow fix things, not just for Nic, but to protect her husband and her other children. She sees the way David is breaking down and how things are affecting Nic’s siblings and she is having no more of it. Any other movie would have had her catch him and this would have been the turn in the third act, but here again like most of the movie, the roller coaster halts to a stop and we are left watching her cry in defeat and anguish. There is a happy ending in one sense although it happens off camera in the onscreen text. The final scene is sad and yet a beautiful representation of how our children never stop being our babies. David is there by Nic’s side ready to keep fighting with him even through all of the devastation, defeat, and relapses. I think there could have been a third act showing Nic’s eight years being sober and we could all leave the theater with a greater sense of hope, but this movie was not made for that reason. There are facts about the devastating toll drug addiction has on our country and that is the message of this movie. We are meant to leave with that same feeling of defeat, but not that we have given up. We are sent away much like David as he hangs up on Nic, not hopeless, but helpless, and that small shred of hope is far greater than the false hope provided by a happy Hollywood ending we are used to. We are left with a desire to do something and that is the intent of this film in my opinion. If nothing else, we are left with a better understanding of addiction and perhaps a less judgmental mindset of those around us struggling with addiction.[/spoiler]