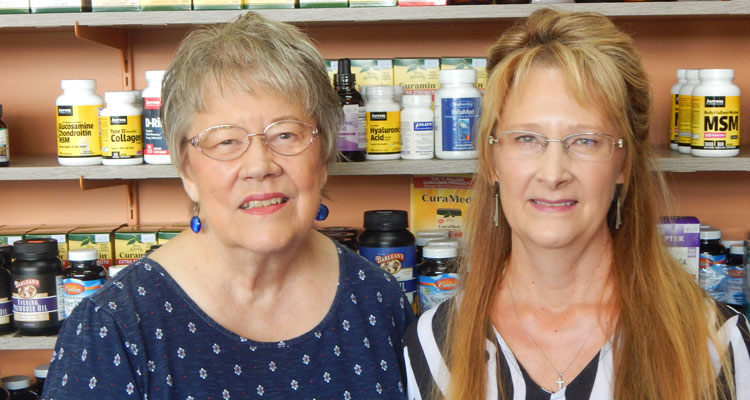 by Sam Jackson
Sisters Cathy Fowler and Carolyn Lumpkin talk frequently about a variety of subjects. But when they talk business, they literally talk business. Fowler and Lumpkin both own different stores in Danville. Fowler is the owner of Nature’s Essentials Herbs & Natural Wellness, and Lumpkin’s store—and Lumpkin herself—is known as the Bra Lady. Siblings running businesses... Read More

Sisters Cathy Fowler and Carolyn Lumpkin talk frequently about a variety of subjects. But when they talk business, they literally talk business.

Fowler and Lumpkin both own different stores in Danville. Fowler is the owner of Nature’s Essentials Herbs & Natural Wellness, and Lumpkin’s store—and Lumpkin herself—is known as the Bra Lady.

Siblings running businesses is nothing unusual, but the circumstances may be. Each found her calling after years spent in another field, and both got into their enterprises around the same time, even though the two shops are very different. Their inspiration, however, is the same.

“You’ve got to want to help people,” Cathy said.

That’s nothing new to Cathy. She worked at the cosmetics counter at the local Belk store for 20 years. The need for a change began after she spent years battling endometriosis, which led to having a large tumor removed, followed by treatment. Still, things didn’t improve.

“For 10 years, I did everything I was told to do,” she said. “But I kept having more problems… and 10 years later, I had six more of those stupid things taken out.”

Almost immediately after that, their mother, who had been in ill health, passed away. “She was on 25 prescriptions, and I was already on about 14,” Cathy said.

“I just decided, ‘I’ve got to do something different,’” she said.

So, she studied natural healthcare, through books and classes, until she moved to Danville and, with sister Cheryl Ashworth, began her their first herb store in 1999.

Although it was rough going at first, as few if any were preaching the benefits of natural care, Cathy stuck with it. To this day, Cathy believes in holistic health and that what goes into the body manifests on the outside.

“There’s always a root to every issue,” she said.

After a few years, Carolyn got involved. Again, her desire was to fill a need.

Cathy and Carolyn’s mother and aunts all suffered through breast cancer, and their grandmother died from it. Carolyn learned the need for specially made bras for women who have had mastectomy surgery. The need for bra sizes that weren’t found in the department store wasn’t new. Several members of their family could never find bras that fit, and their mother used to sew and repair their family’s bras herself. The plight of others in the same boat led Carolyn began a journey toward becoming “The Bra Lady.”

Carolyn didn’t pursue a business until she was in her 50s. While many of her peers were looking to retire, the need to help others led her into her own shop—but not before she sought divine help.

“I said, ‘I’ve been praying about this for years,’” she added, “and it just sort of fell into my lap.”

Both sisters said they underestimated the need for their services when they started.

“I just started out kind of part-time,” Carolyn said. She started the business out of a single room in Cathy’s shop, and then the two opened a new location together in Danville. Before long, each needed their own space.

After advertising her service once, “every time I opened the door, it was full,” Carolyn said. “The door opened, and it’s never shut since.”

In the course of serving the needs of their customers, the sisters learn a little more than they bargained for. That comes with the territory, they say, as people often talk about more personal topics than the ones that brought them into the store.

“I’m not really a therapist,” Cathy said. Still, once you get intimately involved in improving a customer’s health, all doors open. “People tell me stuff they’ve never told anybody.”

Likewise, it’s easy for Carolyn to get close to her customers because of the personal need she serves. That often leads to multiple members of a family coming in for fittings.

“Husbands will come in to get their wives a bra for Christmas,” she said.

Still, the sisters realize that their work is their calling.

“It’s your ministry,” Carolyn said. “You figure that out after a bit.”

But where does this desire to help others come from?

“It was our mom,” Cathy said. “Our mom would feed the country.”

The family lived on a small farm run by their father, who was legally blind after contracting a parasite during World War II. Still, the family grew, made or traded for just about anything it needed—and they shared with others in the community.

Such devotion to others starts in the home, they said.

“You’re going to help your family first,” Cathy said. “And then I just started wanting to help everybody.”

Carolyn said, seeing the relief and joy on the faces of her customers is the best gift. “It just makes you keep going,” she said.

“To watch people feel better,” Cathy said, “it’s the most rewarding thing you will ever do in your life.”

Although the sisters have differing types of businesses, they still share customers with one another. Carolyn, having to frequently serve customers who have been through cancer treatment, can often give referrals.

“I tell them, ‘You need to rebuild your immune system, and I know somebody that can do it,’” she said.

The sisters are on different roads and separated by about three miles. They both need more space than when they started, but that doesn’t mean they wouldn’t like a different setup.

“We still wish we could be in a building together,” Carolyn said.

After over two decades of filling needs and serving customers who fall into very specific categories, the sisters wouldn’t change a thing. The road may have been difficult, but Cathy said the payoffs more than outweigh the trials that come along the way.

It’s all about how you impact the lives of your customers.

“It’s so rewarding when people come up to you and hug you,” Cathy said. “it just makes your heart fall to your toes.”