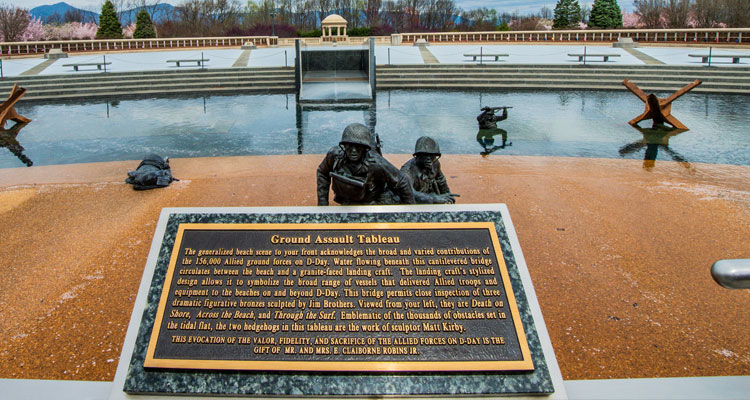 by Sam Jackson
One of the most popular Veteran’s Day tourist destinations in the area will be the National D-Day Memorial in Bedford, which is celebrating its 20th Anniversary in 2021. Not only is the memorial expecting about 1,000 visitors for Veteran’s Day, but the 50-acre site will see an addition this fall, according to Angela Lynch, Associate... Read More

One of the most popular Veteran’s Day tourist destinations in the area will be the National D-Day Memorial in Bedford, which is celebrating its 20th Anniversary in 2021. Not only is the memorial expecting about 1,000 visitors for Veteran’s Day, but the 50-acre site will see an addition this fall, according to Angela Lynch, Associate Director of Marketing for the Memorial.

“This Veterans Day, we will break ground on a new nature trail that will allow visitors to further enjoy our outdoor site,” Lynch stated. The addition to the facility will include “educational elements about how natural resources were used to support the war effort,” she added.

The Memorial was dedicated 20 years ago, on June 6th, 2001, by president George W. Bush. It was constructed in honor of those who died that day, including 19 members of the “Bedford Boys,” of Company A of the National Guard’s 116th Infantry Regiment, which was started in early 1941 from a group of Bedford volunteers, long before World War II began. By the time of the D-Day Campaign on June 6, 1944, the company had 30 members left from Bedford and suffered 19 losses that day, with two other soldiers dying later during the campaign in Normandy, France.

Bedford’s population at the time was a mere 3,200, so the town suffered the largest ratio of deaths in proportion to its population of any in the country. As a result, Bedford was picked as the home of the Memorial.

There have been several additions to the Memorial since its dedication in 2001 to better tell the D-Day and World War II story, Lynch said. “Our memorial wall, remembering the D-Day fallen, sculptures, monuments, and traditional Quonset huts, to name a few” are among the most popular.

Initiated by D-Day veteran J. Robert “Bob” Slaughter, the D-Day Memorial sees around 60,000 visitors annually, according to Lynch. That doesn’t include milestones such as the 75th anniversary of D-Day in 2019, she added.

In any month, Lynch estimated, around 500 visitors identify themselves as a veteran when purchasing tickets at the gate. “That number would not include World War II veterans, who always receive free admission, or those who join us on days that are free for all veterans. While we see a large number of adult visitors, we are seeing more and more families with children at the Memorial.”

“That’s a very promising trend for us. School groups are beginning to pick back up after many were canceled because of the pandemic,” she added.

Each element of the Memorial tells a different part of the story, from the planning of Operation Overlord, as it was named, to the invasion, to victory and beyond.

“One of the most powerful parts of the visitor experience is when guests enter the plaza from the English garden,” Lynch said. “They make their way across the long plaza floor is painted in five blue sections to represent the English Channel and each landing beach. As you approach the beach scene with the realistic water effects that mimic the sound of bullets ricocheting on water and see the Higgins boat and lifelike sculptures, you get the feeling you’re walking into the invasion.”

At the center of the memorial stands a 44-foot arch, highlighted by a reflecting pool that surrounds a scene that conjures images of the bloody, brutal fighting on the beaches of France that day, in which an estimated 4,414 allied fighters died. The German army also was estimated to have lost anywhere from 4,000 to 9,000 on D-Day, and the total number of casualties during the Normandy campaign from June to September 1944 is believed to be more than 200,000.

All 4,414 names are inscribed on bronze plaques at the Memorial, representing every allied soldier, sailor, airman and coast guardsman killed.

“Many D-Day veterans have told us over the years that we really got it right, that the beach tableau captures that day,” Lynch added.

Besides D-Day itself, where in a given year the memorial sees more than 2,000 visitors, Lynch said Veteran’s Day is one of the busiest of the year.

Due to the nature of the memorial and its subject matter, the atmosphere is a somber one, but the mood is necessary in order to help visitors to the memorial understand the time period of World War II and the political pitfalls that came with the planning and execution of Operation Overlord.

The D-Day memorial foundation intends to foster an appreciation of D-Day’s historical and residual significance through its commemorations, programs, projects, and exhibitions. Now, as fewer and fewer World War II veterans who experienced the war firsthand are left, the mission of monuments such as the one in Bedford is more important for future generations, according to the memorial’s website.

Haunted Southside
Previous Post
How to Volunteer to Help a Veteran