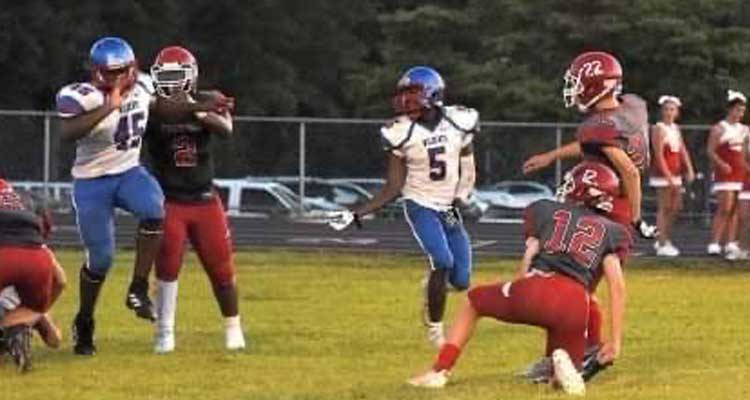 by Davin Wilson
Tunstall will open its fourth season under head coach Randy Hunsicker. With all COVID-19 protocols behind the Trojans, Hunsicker is excited to see what his team can do with the return to normalcy. Here’s five things you need to know about Tunstall heading into the season… Return to Normalcy The name of the hit movie... Read More

With all COVID-19 protocols behind the Trojans, Hunsicker is excited to see what his team can do with the return to normalcy.

The name of the hit movie and TV show might be “Friday Night Lights,” but if the series had taken place over the 2020 and 2021 seasons, then naming both would’ve proven harder.

Because of the coronavirus pandemic and its protocols, Tunstall not only played games on Friday, but Mondays, Tuesdays, Wednesdays, Thursdays, and the occasional Saturday as well.

The Trojans’ schedule will return to normal this season. According to Hunsicker, that will benefit his team greatly.

“One of the most important things about this season will be the ability to get back to normalcy,” Hunsicker said. “Our players are working to get tough. They are working to remain injury free and stay in games for the long haul. Last year, we played every day of the week except for Sunday and had six games on 24 calendar days. A normal season will allow us to find a rhythm that was missing over the last two years.”

Hunsicker believes the return to the Friday schedule will also provide the Trojans with consistent leadership. He looks for senior quarterback Evan Burnette to continue the same direction he provided last year before going out with a season-ending injury in Week 3 and looks forward to seeing what junior running backs Bricen Poole and Ryan Jones can do as well.

“Along those same lines, our team will be able to be consistent in supporting and leading each other,” Hunsicker said. “Our quarterback went out because of an injury in the third game last year, but [Evan Burnette] is back and ready to lead the offense. With Bricen Poole and Ryan Jones in the backfield, they will be a force. Poole and Jones stepped up last year and pushed our offense each game.”

Burnette was on pace to have to a stellar season last year as he completed 21 of his 39 passes for 288 yards and a score before going down for the season in Week 3. He was especially solid in Tunstall’s season-opening win over Dan River where he finished 8-of-16 with 113 yards and a passing score.

Poole was a force to be reckoned with last season as well, leading the team in rushing yards (538), rushing scores (5), and carries (123). He also recorded a team-high 162 receiving yards on a team-high 13 carries and a receiving score.

Jones finished with 186 rushing yards and four scores on 42 carries while hauling in nine passes for 50 receiving yards.

Expect all four to be offensive threats for the Trojans this season.

Lose Some, Gain Some

Hammock and Jones are two guys Hunsicker expects to have big impacts on both sides of the ball. To go along with his offensive numbers, Jones finished second on the team last year in tackles with 46, including a team-high four for a loss, a sack, and a fumble recovery.

Hammock turned in an impressive season on the defensive end as well, recording 23 tackles in nine appearances.

Hunsicker commented on how excited he is to have rising juniors Grant Saunders, Curtis Ingram, and Jacob Powell coming back, and how the Trojans plan to use all three in several positions on both sides of the ball.

Hunsicker is also excited to see how returning seniors Trey Collins and Xavion Jaimies will perform after seeing time on both sides of the ball last season.

Coaches smile when they see a kicker who delivers in a soccer style. Luckily for Hunsicker and the Trojans, they have just that in junior Braeden Barber.

Barber is a two-year standout on Tunstall’s boys soccer team and Hunsicker is excited to see how he will perform and contribute this year.

“Special teams will be important to the success of the program. Braden Barber is returning to kick for us. He shows huge development each week,” Hunsicker said.

Hunsicker also mentioned some adjustments he made to the coaching staff in the offseason, and how they will benefit the Trojans this season.

“Our coaching staff is adjusting to the year as well,” Hunsicker said. “Charles Fulcher will come up to the varsity team full time and will lead the defense. Play development, new ideas, and openness will be keys as we develop this year’s plans for success.”

As far as the message he wanted to deliver to Trojans fans?

“We want the Tunstall community to know the Trojans are committed to victories and appreciate all their support,” he said.