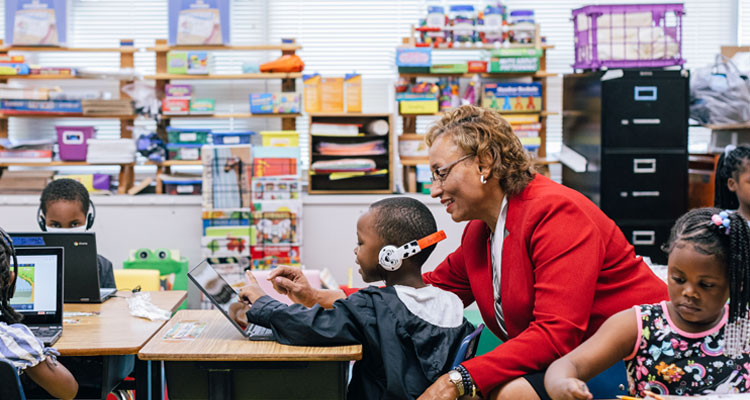 by Sam Jackson
For Dr. Angela Hairston, it pays to have a plan, and it pays off even more when you put that plan into action. That’s what drives Hairston in her role as superintendent of Danville Public Schools. Strategic thinking in the pursuit of academic excellence. That pursuit has come during a challenging time, however, as Hairston... Read More

For Dr. Angela Hairston, it pays to have a plan, and it pays off even more when you put that plan into action.

That’s what drives Hairston in her role as superintendent of Danville Public Schools. Strategic thinking in the pursuit of academic excellence. That pursuit has come during a challenging time, however, as Hairston stepped into her role Dec. 1, 2020, with a mandate to improve student performance.

“How has it been since I’ve been here?” Hairston said. “Lots of change.”

When Hairston, who returned to her hometown of Danville after serving as superintendent of Winston-Salem Forsyth County Schools, started work at the end of 2020, schools were beginning returning to face-to-face instruction.

In addition, the district had, working with the Virginia Department of Education, created a corrective action plan to address the shortcomings VDOE found in the district in previous years.

“We had that in place,” Hairston said, “and I’m pleased to say that today we have a great strategic plan.”

Hairston said the corrective active plan provides “a road map” to where the community wants to go. One of its goals was to improve student achievement by increasing access to new courses, instruction, and other support. It aims to improve such metrics as attendance, teacher quality, and graduation rates—what Hairston calls “measurable achievement standards” in the future.

“We can’t continue with just a focus on past performance,” she said. “We have to be looking forward, and we feel our strategic plan supports us with a vision that looks forward.”

Hairston said the district also aims to use funds efficiently, making sure the majority of funds in the district’s budget are spent on student achievement and staff recruitment.

Also, all schools are seeking to improve other measurable, such as on-time bus delivery and higher attendance rates. Such advancements will also better the level of public satisfaction with the district, she said.

“The efforts are about improving relations with the community,” she said. “Making sure we have a climate and culture that feels safe for students.”

Under the corrective action plan, Hairston said, “I think supporting improved classroom instruction has been the area we’ve focused on most.” That hasn’t been easy, especially as schools have slowly returned to in-person instruction.

“We’re very proud of the fact that we’ve been able to come back to a face-to-face learning environment with only two missed instructional days,” Hairston added. “Still, we’ve needed to help fill gaps because of the lack of face-to-face instruction during the pandemic.”

Fortunately, “we were able to identify those gaps,” she said.

However, the instructional gaps may have had little to do with instruction itself. Instead, an effort has been made to better relate to the students.

“Coming back to the school environment has been an adjustment,” Hairston said. “Clearly, being disconnected from others impacted our children. I’ve seen cases of extreme anxiety, depression… we were able to place mental health counselors in the schools as well as other mentors, probably for the first time in the schools in a big way.”

The challenge has been significant for teachers, as well.

“We’ve had to really go back to understanding childhood development strategies to learn to better relate to kids,” Hairston said. “Especially in the cases of younger elementary students.”

For a young student, for example, “that child has missed two years of time to develop socially in a school setting,” she explained. “We’re having to go back and ask, ‘What does a fourth grader look like? What does a seventh-grader look like?’”

“It’s really looking at the child and how they develop over time,” she added.

Hairston said the district was trying to make better use of the funds the district had in ways such as increased and improved availability of tutors. There are also bigger projects on the way thanks to increased funding from the city.

“Ground has been broken on a new main office for DPS, as well as a new Galileo Magnet High School. More teachers are being sought, and there is a great sense of optimism within DPS this year,” Hairston said.

“Our school board members are engaged in the work. We’re using data to drive our decisions, and I’m telling you, this year will be one like no other,” she added.

And what about when class isn’t in session? Hairston said parents have called her with questions again, and that’s a good sign, and she encourages parents to take part in their child’s education.

“Our message to parents is to support your teachers. We want your children to read, read, read, beyond the classroom,” she said.